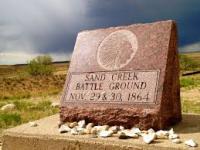 At the appointed time, 8 PM, November 28th, Chivington set out with around 700 men, consisting of both 1st and 3rd Colorado Cavalry, along with four 12 pound Mountain Howitzers. They rode through the night in very cold and snowy conditions and arrived at Sand Creek at dawn of the 29th. The Native village was camped along the creek -- the creek itself was mostly dry. Inside the village was a private from Fort Lyon who had been given permission by Anthony to visit the village a few days prior, along with interpreter John Smith, who was visiting his Cheyenne wife and halfblood son Jack. Another mixed blood present was George Bent (son of William Bent and Owl Woman, a Cheyenne), who survived the war and told of his life years later. These men provided an idea of what happened inside the village. John Smith and the private present testified at the hearings the following year. The village is estimated to have had about 700-800 people, mostly elderly, women and children. Both Cheyenne and Arapaho were present.

Barking dogs alerted the inhabitants of Chivington's presence. Once he saw he was spotted, Chivington sent his troops to circle around the village, one group moving to cut the pony herd away from the village. Two of the howitzers fired grape shot into the village. George Bent says  ‘...in the camps themselves all was confusion and noise-men, women, and children running out of the lodges partly dressed;’ Bent describes the desperate attempt by the men to protect their family. He mentions how Black Kettle came from his lodge and raised the American flag he was given along with a white flag over his lodge (or placed them on a pole and waved it). He then tried to calm his people. White Antelope ran to the dry stream bed and placed his arms over his chest to signal peace. White Antelope was gunned down and later his scrotum was removed to make a tobacco pouch. During the attack One Eye, who had ridden to Fort Lyon to seek peace, was killed. Black Kettle and his wife managed to escape, but she was badly wounded. Other important peace chiefs were killed. The Arapaho Left Hand received a fatal injury that he died from later.

Quickly the village was overwhelmed and men, women and children fled to the west sand hills where people hastily dug pits for protection. Chivington later claimed it was premade defenses but testimony from the ones in the village show it was instead made in desperation. With the men shooting back at the soldiers the howitzers were brought up and fired into the pits, killing even more women and children trying to hide. Bent, on his retreat to the sand hills mentions ‘Many of the people had proceeded up the creek, and the dry bed of the stream was now a terrible sight: men, women, and children lying thinly scattered on the sand, some dead and the rest too badly wounded to move.’ Bent received a near fatal injury with a bullet to the hip during this altercation as well.

Cpt. Soule and Lt. Cramer, seeing the battle as an unprovoked attack, held their company back and refused to take part. Cramer had used the excuse of a cross fire to pull his company back to prevent friendly fire. Soule was heard to condemn the attack.

John Smith and his soldier companion tried to stop the attack, only to be shot at themselves and forced into a lodge where they hid under buffalo robes. Eventually they were able to join with the army for protection during the looting. Jack Smith was taken prisoner. The killing went on for the rest of the day. Once the majority of the fighting stopped, around 3 pm, the mutilations began. Looting of the village also took place as soldiers hunted for trophies.

John Smith testified that both men from the 1st and 3rd took part in the mutilations. Scalps were taken, along with ears and fingers for jewelry decorations. Fingers were cut off for the rings the victims wore. Cramer wrote later ‘..a squaw ripped open and a child taken from her, little children shot, while begging for their lives..’ added later in the letter ‘..things that Indians would be ashamed to do.’ Women’s bodies were also mutilated by having vaginas and uteruses removed to be hung on hats or spread upon saddles. Soule and Cramer also testified that the wounded had their brains beat out. There are no reports of rape in this encounter. There was also mention by several participants of a baby being put in a feed box and eventually dumped along the road to Denver to die of exposure.

The night for the Cheyenne and Arapaho survivors was terrible. Without their village and supplies they were left exposed in the cold winter night. George Bent remembers that night saying “That was the worst night I ever went through. There we were on the bleak, frozen plain, without any shelter whatever and not a stick of wood to build a fire with. Most of us were wounded and half naked; even those who had time to dress when the attack came, had lost their buffalo robes and blankets during the fight.” They slept for a  time, but unable to take the cold wind started walking again, the nearest camp being over fifty miles away. They were also fearful of pursuit. However some men had escaped with horses and rode to a camp on the Smoky Hill river. A large group set out to help rescue the survivors, bringing buffalo robes, food and spare horses.

Check back for the conclusion later this week, and if you missed part one, click here. 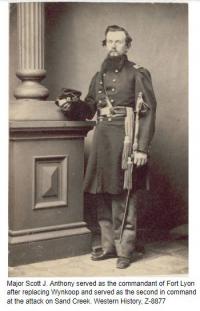 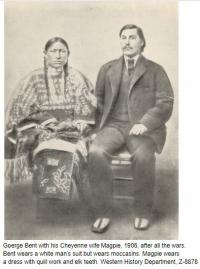