Prelude to the Sand Creek Massacre 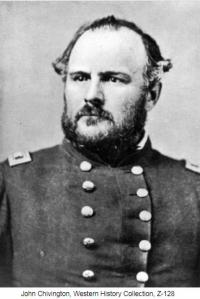 November 29th, 1864 is a day of infamy in Colorado and one of the most controversial events in Colorado history. There is still debate on whether or not Sand Creek is a massacre or a battle.

The Cheyenne and Arapaho Found themselves dealing with an influx of newcomers when the Pikes Peak Gold Rush of 1858 brought waves of immigrants into what was then Kansas territory, Colorado territory after 1861. The Cheyenne and Arapaho signed the 1861 Treaty of Fort Wise, which confined them to southeastern Colorado on a reservation. For the Natives 1862 was quiet, hunger and disease dominating their year. Colorado had joined the Union in the Civil War and sent troops to New Mexico to repel Confederate invaders at La Glorieta Pass; they returned as war heros with Major, soon promoted to Colonel and commander of Colorado’s forces (skipping Lt. Col), John Chivington.

Trouble began in 1864. With hunger a constant problem, the Native Americans had started stealing cattle and Chivington sent troops after them. Along the Smoky Hill River in Kansas, May 15, 1864 the Colorado 1st cavalry rode towards Lean Bear’s village. The chief had been to Washington as a delegate the past year and received a Presidential Peace Medal. The chief rode out with the peace medal and documents from the treaty. Without warning the soldiers shot and killed Lean Bear and his companion, shooting them again as they lay on the ground. A short fight ensued with the Cheyenne. Other smaller fights with bands of Cheyenne happened in the summer. According to Cheyenne and Arapaho, this was the start of the war.

Retaliatory raids followed the killing of Lean Bear, mostly in Kansas by the Dog Soldiers. Not as much happened in Colorado but the worst incident was the Hungate Massacre where four members, including two children were killed and horribly mutilated, in a way more vicious than usual. It was later determined it was Northern Arapaho who were responsible.

This killing sparked a panic in Denver with fears of a general Indian attempt to wipe out the whites and a general assault on Denver. There were plenty of false alarms. This led territorial Governor John Evans to ask for and receive funds for creating a hundred days volunteers (the length of service), the Third Colorado Cavalry, giving Colorado three voluntary cavalry regiments.

Cooler heads seemed to prevail on September 4 when the peace chief One Eye approached Fort Lyon in southeastern Colorado, near Las Animas, with peace proposals. Despite the order to shoot any Indian on sight, he was allowed to see the fort’s commandant, Edward Wynkoop, who was persuaded to visit the village on the Smoky Hill River in Kansas. With a detachment of soldiers Wynkoop met with the peace chiefs, including Black Kettle, White Antelope of the Cheyenne and Left Hand of the Arapaho. An agreement was reached and the group went to Denver. Governor Evans tried to avoid meeting with the chiefs but finally did, believing that making peace would show the territory to be ‘whipped'. It was agreed that if the chiefs wanted to be friendly towards the government they had to camp in the reservation area, and were given a flag to fly to show their allegiance.

The chiefs went back to their village on Smoky Hill and brought their followers to Fort Lyon. However rumors spread that Wynkoop was letting the Cheyenne run things and he was replaced by Maj. Scott Anthony. After Anthony arrived he had the Native village relocated north and east of the fort along the seasonal stream of Sand Creek, informing them they were prisoners of the government. He also employed One Eye to keep him informed about movements of ‘hostile indians’.

Meanwhile Evans was worried about his Third Calvary. He had asked for special funds for them and since they had only seen one minor skirmish newspapers were starting to call them ‘The Bloodless Third’. Evans was concerned that if the Third mustered out without any battle Washington would think he was misrepresenting the situation. Wynkoop wrote that Evans said ‘..therefore there must be something for the third regiment to do'.

Chivington gave orders to march, protecting the stage line in Kansas as the reason. Taking command Chivington took the entire Third, and three companies of the First and headed south from Denver reaching Fort Fillmore near Pueblo in deep snow. Then they struck east towards Fort Lyon. Along the way Chivington sent a small detachment to guard William Bent’s ranch, who had married into the tribe at Sand Creek, to stop any alarm. Just outside the fort Cpt. Silas S. Soule, who was with Wynkoop at the peace negotiations, met Chivington and stressed the natives at Sand Creek were considered prisoners. Soule stated later an officer was overheard saying ‘They won’t be prisoners after we get there.’

Chivington’s arrival on November 28 at noon, especially with such a force, was a surprise to Major Anthony. Chivington had a cordon put up around the fort with orders that no was to leave on pain of death, according to Lt. Joseph Cramer ‘..like a thief in the night throwing his scouts around the post.’  Getting over his surprise Anthony welcomed Chivington and pledged his willingness to attack. Preparation began for preparing camp, the men taking rations and forage for the horses. The plan was to leave at 8 pm and march through the night to gain a surprise attack.

Early in the evening Chivington had a meeting with several officers. Cpt. Soule and his friend and fellow officer, Lt. Joseph Cramer, had previously objected to the plan of attack to Maj. Anthony, their superior, but without success. Others began to object to Chivington’s plan, who eventually exploded in rage, stating ‘Damn any man who is in sympathy with an Indian.’

Colorado’s day of infamy was approaching. Check back for part 2 of 3 posted here soon. 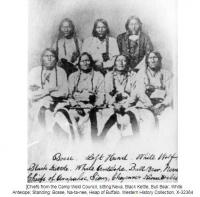