Architect of the North Wing of the Central Library 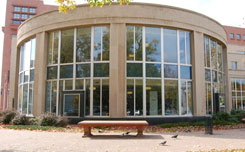 Burnham Hoyt (1887-1960) was born in Denver, Colorado and graduated from Denver High School, North Side, in 1904. Hoyt was a gifted and visionary architect and designed the north wing of the Central Denver Public Library, which opened in 1955. He also designed the amphitheater at Red Rocks State Park and the State Capitol Annex Building.

Hoyt began his architectural apprenticeship with the Denver firm of Kidder and Wieger. With the encouragement of his older brother, Merrill, Hoyt attended the Beaux Arts School of Design in New York City in 1908. He continued his apprenticeship in New York City at the firm of George Post and Bertram Goodhue. Hoyt then served for two years in the Army during World War I, designing camouflage. In 1919, Hoyt returned to Denver to join his brother in an architectural firm named M.H. and B. Hoyt, Architects.

In 1926, Hoyt accepted a commission to design the interior of The Riverside Church in New York City. Hoyt remained in New York City to join the faculty of the New York University School of Architecture. In 1930, Hoyt became Dean of the School of Architecture. He taught at the university until his brother, Merrill, died suddenly in 1933. Hoyt eventually returned to Denver to fulfill the firm's commitments and to establish his own firm.

The Bromfield Residence of 1936 was Hoyt's first Denver design for his new firm. Upon completion, this structure received national attention and was included in surveys of modern architecture. Hoyt designed many private residences throughout Colorado for clients such as Adolph Coors and the Tammen family. Some of his most significant designs were for institutions. The Denver Children's Hospital (1936) and the Boettcher School for Crippled Children (1938) received national recognition.

Constructed in the 1930s with Civilian Conservation Corps labor, the Red Rocks Amphitheater was selected as one of the decade's 50 outstanding examples of American architecture by the Museum of Modern Art in New York City. Hoyt incorporated natural topographic features and rock formations in his design.

Collaborating with the Denver firm of Arthur and Alan Fisher, Hoyt designed the Denver Public Library.

In 1936, Hoyt married Mildred Fuller. Hoyt was diagnosed with Parkinson's disease in the early fifties, and by 1955 he was forced to close his practice. He died at his home in 1960.

Sketch of an entrance to the Denver Public Library, 1950s

Check out Burnham Hoytat the library.