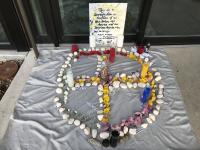 Recently, local community organizer Noé Orgaz took the time to construct an altar outside the Rodolfo “Corky” Gonzales branch’s west entrance. While on display, the altar provided a physical space for people to view, visit and potentially add to in these increasingly troubling and intangible times. In particular, the space functioned as a memorial to the myriad lives lost at the hands of racially motivated violence, in both our recent and distant past.

The altar was brought inside after it appeared to have been vandalized. This photograph (courtesy of Nicolás Cabrera) was taken June 19, 2020 when the altar was in its initial state as Noé and his family put the final touches, lit candles, and burned incense. The sign reads: "This is a Community Altar in remembrance of our Black Relatives and Ancestors and our Indigenous Ancestors whose land we occupy. #BLM #MMIW #William DeBose #CorkyGonzales."

As a communal institution, we thank the elegiac efforts of those who contributed to the altar and the unifying voice they provided for a community currently unable to gather at our branch.