Colorow and the Ute Aftermath 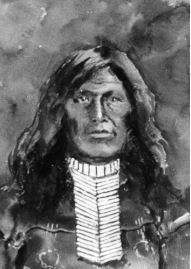 August 24th, 1887, almost one year after Geronimo surrendered, Colorado found itself at the brink of another ‘Indian War’, one that a local posse started with some Ute hunters. What happened to bring about this event, almost totally forgotten in American History (and Colorado history for that matter), was a continuation of the urge to have the Utes removed and the treaty that made it happen. One of the leaders in the Ute camp was Colorow, a man who was an important leader during the 1879 Ute war and whose name is found in several places around Jefferson County and Middle Park (where Hot Sulfur Springs and Kremmling are today).

Colorow, picture above, was originally born a Comanche. (image: Painting believed to be of Colorow in his younger days, Western History Department ZZR710030712). As a young boy he was taken captive by the Southern Utes of New Mexico where he was named “Colorado” (meaning colored red) because he was more reddish in pigmentation than the Southern Utes. His name was eventually mangled into Colorow. Colorow moved to Colorado where he traveled greatly and spent his time in modern Jefferson County, making friends with local ranchers. He rose in power with raids against Cheyenne and Arapaho, later moving to the White River Valley where he became one of the major leaders among the Utes. Colorow was one of the last to leave his homeland during the removal.

Following the 1881 removal of the Utes to Utah’s Uintah and Ouray Reservations, the US was obligated to feed the Utes with annuities. The Utes were allowed to continue to hunt in Middle Park and the White River Valley, their traditional hunting grounds as stated in the 1873 Brunot agreement. One leader who took advantage of this was Colorow, whose band rarely needed annuities since they hunted in Middle Park. Colorow and his band, along with other Utes, also frequented Glenwood Springs, namely the hot springs that have always been important to them for health benefits. In 1885 local papers complained of Colorow’s band hunting in the White River and Yampa valleys and that cattle ranges had been burned. The reason for burning was a traditional practice by Native groups to keep the land healthy.

The twin Indian Reservations in northern Utah, Uintah and Ouray, underwent several changes of hands in the years following the Colorado Utes arrival with their Utah Ute brethren. In 1887, when the troubles began, the agent was Colonel Timothy Byrnes. At the same time a fort was built, Fort Duchesne, garrisoned by soldiers of the 9th Cavalry, the famous Buffalo Soldiers. There was tension with the settlers of Colorado's Middle Park and White River Valley, who moved in within days of the Utes removal. During the summer of 1887 there were  several bands of Utes hunting and camping around the White River Valley and Middle Park. In that summer two events led to what was dubbed “Colorow’s War”.

First was the murder of a Ute chief by a Mexican miner. One of Colorow’s sons was sent to the newly elected sheriff of Garfield County where the murder took place. The sheriff  was Jack Kendall (sometimes spelled Wendall). He did nothing. Word reached the sheriff of three Utes stealing horses near Rangeley that were subsequently sold in Meeker. A grand jury issued warrants and Sheriff Kendell and a posse, including the state game warden, rode out to arrest the culprits. They came upon the camp of Colorow’s son, also confusingly referred  to as “Uncompahgre Colorow” - for clarity's sake he will be referred to as Colorow Jr.

The camp was found absent of most of the men and women, who were almost certainly out hunting. There were some still present however. Without any warning, Kendall’s posse seized a young boy who was one of the guilty parties. The boy’s father objected and was shot, left wounded and stunned. The boy’s sister and another woman responded by attacking with axes, shots were fired, and the boy they were trying to arrest was wounded. This led to the camp of Utes fleeing to join with Colorow’s (senior) band camped on the White River. They fled leaving livestock behind, consisting of sheep, goats and horses, the main currency for the Utes, which numbered in the thousands.

Next the posse found another camp belonging to Enny Colorow, son of Colorow Jr. He was absent gathering annuities in Utah. The posse found only women and children present, who felt threatened and also abandoned their prized sheep and goats and fled to Colorow Sr’s camp. There was a brief exchange of gunfire and a Ute boy killed a posseman’s horse.

Enny returned from the Utah agency to find  his family’s camp abandoned and two teepees burned and the camp ransacked. He rode back to Utah to get help, arriving on August 13th. Kendall next rode to another camp along Yellow Jacket Pass. This was the camp that belonged to Aacooomorquats and Chipeta, styled “Queen of the Utes” by the press and non-Utes. After Ouray had died in 1880 Chipeta lived alone in mourning in Utah before marrying Aacoomorquats. They had adopted several orphaned Utes. With her husband and the men out hunting, Chipeta, who was fluent in English, attempted to settle the situation, but instead she was harassed. Chipeta  ed  the occupants away to a nearby hill and watched as the posse looted and burned their camp. Chipeta lost all her livestock. Like the other camps they fled to Colorow Sr.

Enny meanwhile had arrived at the agency and alerted agent Byrnes. The agent was very concerned about the situation and dispatched his chief header and several Ute men to Colorow Sr and guided them back to Utah. Colorow Sr had heard about the horse theft and demanded the horse and money be returned. Once the Utah party met Colorow Sr. he decided to return to Utah, estimating it would take 15 days to make the trek with all their baggage and livestock. Kendall meanwhile rode back to Meeker and began spreading alarm that the Utes were ‘on the warpath’ and would massacre everyone in Meeker. Panic ensued and Governor Alva Adams, upon getting word, raised the Colorado National Guard, bringing up 1,000 men. They arrived in Meeker on August 22nd. Kendall brought his posse out again and trailed the Utes heading back to Utah, down the White River Valley. This turned into both a chase after the  Utes and a contest between the local posse and the Guards as to who would catch the Utes first. To make matters worse, severe summer hail storms hindered everyone.

On the morning of August 24, another son of Colorow named Gus tried to stop the advance of the Colorado Guard to no effect. The posse and the Guards rode down the valley and found a camp along the mouth of Fox Creek, near a bend of the White River 11 miles west of Rangely and only two miles from the Utah state line and reservation border. The Utes in fact believed they had arrived safely and were cooking breakfast when the posse arrived and started shooting. A confused two hour skirmish ensued. Some 100 Utes joined (from Utah) with Colorow Sr. to protect his people as they fled for the safety of the reservation. Sam Atachee rode towards the posse/Guards with a flag of truce begging for the shooting to stop to allow the women and children to escape. He was shot in the leg. The fight finally ended when both sides ran out of ammunition. The Utes suffered around 8 dead while the posse and Guards suffered four killed, among them Kendall’s deputy Jasper Ward, the founder of Newcastle and an old friend of Colorow Sr. Adding to that tragedy, among the Utes killed was a baby and a child. While fleeing, the Utes lost everything  they possessed.

The posse/Guards seemed inclined to invade the reservation. However a message had arrived at Fort Duchesne. Agent Byrnes implored the commandant for help. First Lieutenant George R. Brunett and ten 9th Cavalry Troopers (one white man and ten African Americans) rode to the rescue, but unlike in popular literature, the cavalry arrived not to help the posse against the Indians but to rescue the Indians from the posse. This led to a federal versus state standoff. The National Guard and posse were ordered to cease and desist. The 11 men of the 9th escorted the frightened and exhausted Utes back to the reservation. This entire episode brought attention to the plight of the Utes who were trying to maintain their treaty rights, and found themselves subjected to life threatening attacks by a local posse. Chipeta’s loss of her wealth also added to the sympathetic outpouring since she was so highly regarded by both her people and the Whites. The ‘war’ cost Colorado $80,000 in taxpayer dollars to chase after what was less than 200 men, women and children, not counting the Ute men who arrived during the final skirmish.

The Utes pitched camp near the Reservation agency for protection. In Colorado the settlers were given the right to shoot any Native on sight, a law dating back to1864 that was only repealed by Governor Jared Polis in 2021. With the outpouring of sympathy to the Utes from multiple sources the Secretary of War criticized the posse’s response. With the families involved left destitute, some wanted to travel to Washington D.C. and request compensation. The travel request was denied but eventually Congress paid $30,925.72 to the Ute families. Colorow Sr. did not live to see it. He died December 13th 1888 at the Ouray Reservation. He is sometimes incorrectly reported to have died from injuries during the ‘war’ but according to contemporary obituaries, he died of pneumonia. His age was not known, but likely was over 70 and suffering from diabetes. In 2015 he was inducted into the Jefferson County (CO) Hall of Fame.

The Utes continued to try to hunt in Colorado. Beginning in 1891 Colorado hired more game wardens to control the poaching, mostly by Whites, but they also went after Ute hunters. In 1897, at Lily Park in Browns Park (where Utah, Wyoming and Colorado come together) there was a shooting incident involving game wardens and Utes. A Ute man had a hunting permit for horses but when confronted by the wardens he was told he was out of the area permitted. A scuffle ensued, a Ute woman flashed a gun and shooting started. Six Utes were killed but no wardens were killed. Investigations followed but the wardens were exonerated. Fortunately, this did not lead to another ‘war’ and attempt to chase the Utes back to Utah. With all this pressure the Utes eventually stopped hunting in Colorado, surrendering their treaty rights, not because they lost it in another treaty, but because of the violent attacks. The Utes were forced more and more into assimilation on their reservation, especially with the Dawes Act, which aimed to break up tribal lands into family plots. Excess land was sold to the government. Despite the efforts to assimilate them, the Utes have maintained their culture to this day.