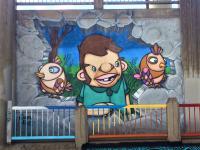 Mike Graves was born in Colorado and besides a short 3-year stint in Hawaii he has been filling up galleries and walls in our state since he got out of high school. You have probably seen his work around town, big cartoonish characters and mash-up creatures spawned from his imagination as well as his daughter, Olive. Each mural begins with a ton of sketches and then sketching on a wall, Mike uses no grids or projectors, just his memory and a can of spray-paint. This style has brought him recognition around Denver and has taken him on the road to places like Las Vegas, San Francisco, Phoenix, Miami, Chicago, Houston, LA, New York, Canada, Australia and the U.K. You may have caught him painting live at a music festival or tossing paint around at the Crush festival in Denver but if he is not painting, you can always catch him and Olive going through books for the next creature they might collaborate on. 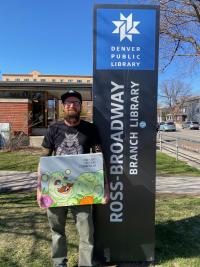 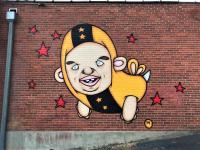 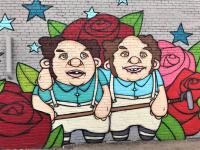 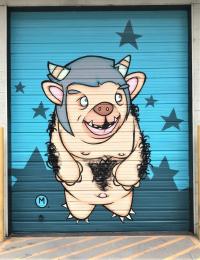