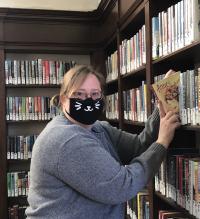 Born in 1890, Quantrille Day McClung was the first librarian at the brand new Park Hill Branch Library, which first opened its doors in December 1920. One hundred  years later, I am her equivalent, charged with the care of this now historic Carnegie Branch Library, one of the 1,689 public libraries funded across the country by steel baron, Andrew Carnegie.

Pouring over Miss McClung’s Memoirs of My Childhood and Youth in North Denver, published in 1979, her lifelong love affair with books is evident. While not all librarians are born book devourers, McClung and I both shared a love of books from an early age. I wonder if she ever stayed up til the wee hours organizing her books as a child as I did? While children in the early 1900s did not have nearly as many books in their home, I would bet that she did, small fingers petting beloved book spines by flickering candlelight.

“I always loved big words and was inclined to coin them myself,” she wrote in her memoirs. She also spoke of her early love of collecting cards, clippings, archaeology and making notes on what she learned, “unconsciously training myself for my later profession.”Her favorite book as a child was Robinson Crusoe by Daniel Defoe, and she recalled that the “part telling about the cannibals affected me quite deeply,” physically impacting her to the point that she was pale, faint, and a friend had to revive her during recess with cold water from the old iron drinking fountain. I’ve never read Robinson Crusoe, and am suddenly intrigued, though cautious as I am equally impressionable and impacted by what I read.

Miss McClung was 30 when she became the head librarian at Park Hill, but had been working for the Denver Public Library since 1911. It’s not hard for me to imagine her, a bright woman of 21, looking to make her way in the world, move out of her family home in North Denver where she lived with her parents and younger brother, or help her family save up for one of the new inventions of the time - an automatic refrigerator or washing machine. She lived her whole life in Denver, contributing mightily to the Colorado community.  Miss McClung was a graduate of the first training course offered in Denver for librarians, a program launched by City Librarian Chalmers Hadley in 1911. In that same year, Hadley also made the “progressive” decision to condense the two-card system (one library card for Fiction and one for Non-Fiction). In addition to creating the program that launched Ms. McClung’s long library career, Hadley also worked closely with Mayor Speer, who personally wrote to Andrew Carnegie to request the funds for the first four Denver branch libraries.

Miss McClung’s diary contains the only recorded anecdote of the exact day the branch opened, on December 23, 1920. If you are shaking your head in wonder at this date, I don’t blame you, as I do too. No other official records exist documenting the opening date of the Park Hill Branch. My theory is that the funds supplied by Mr. Carnegie were obligated to be spent and in use by December 31, 1920, or perhaps, after Mr. Carnegie’s death in 1919, the pomp and ceremony of new Carnegie branch openings had faded. This wasn’t Miss McClung’s first time working at a brand new Carnegie branch, as she was sent to the Warren Branch in 1914, a move I take to mean she was trusted and competent in her chosen field, even early in her career. The Warren Branch became beautiful lofts for lucky residents, so I do not take the long life of my beloved branch for granted.

I imagine Quantrille’s daily routine as a librarian was very different than mine is today. In 1920, a customer could borrow 10 books at a time, four of which could be fiction, compared to 100 of an infinite variety today. Reading for recreation was on the rise in this era as more and more people were literate. Libraries for the public were still a somewhat novel idea, as just 25 years earlier they were rare across the nation. Did she worry that they didn’t have enough of the latest copies of Agatha Christie, Edith Wharton or T.S. Eliot? Through our shared connection of librarianship, I surmise that she was aware of the profound social changes the world was undergoing in the early 1920s and she was keen to use her skills to help her community, just as I am for mine.

Modern bungalows, constructed for prospering postwar families, were beginning to pop up in the newly developed suburb of Park Hill, and she was in prime position to be their local librarian, introducing them to the wide world of the written word. She broke new ground in 1924 when she implemented a Poetry Circle as a substitute for the established Story Hour and went even further writing, “Of what avail is the knowledge of poetry if we cannot find joy in reading it?” McClung focused on the pure enjoyment of reading and listening, instead of practicing the formal gatekeeping that others engaged in at the time. Would she be proud of me breaking new ground in the same building with the Underground Comedy Club, concerts and putt-putt nearly a century later? My librarian instincts tell me that she’d see the laughter and connection and give a quiet nod of appreciation.

Miss McClung retired after 36 years of service to the Denver Public Library, and went on to contribute extensively to the fields of Colorado History and Genealogy. In this work, she documented the genealogy of several Colorado governors, and published a three-volume set on the Carson-Bent-Boggs families, linking those families back to Daniel Boone. In 1983, Governor Dick Lamm proclaimed March 3, her 93rd birthday, to be Quantrille McClung Day. In 1996, she posthumously received the Vogels Award, recognizing her service to the genealogical community. Miss McClung died in July 1985.

Quantrille McClung dedicated one third of her long life to serving Denver through exceptional library stewardship and innovation and is credited with founding the nationally treasured Western History and Genealogy Department. While I have only worked at the Denver Public Library for 20 years thus far,  Emulating her 36 doesn’t seem out of the realm of possibility. McClung’s substantive contributions to the field gives me a very illustrious guiding star to follow.

With these words, I reach through time toward a mentor and hero I never met, a librarian who saw the tumultuous times of widespread pandemic and social unrest impacting her community, and utilized her skills and knowledge to the best of her ability. I strive each day to hold the example of this foremother of librarianship close to my heart, and to make choices today that will positively alter the landscape of librarianship 100 years from now. 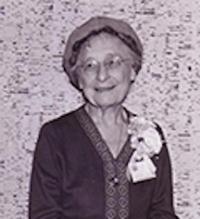 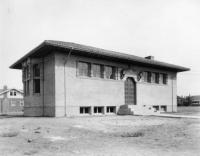 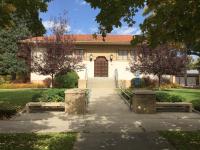 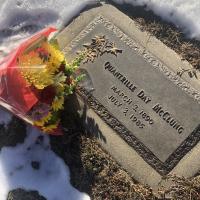 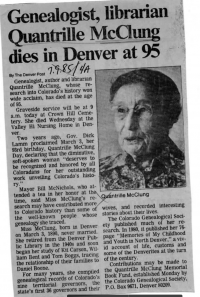 Fantastic write up! Way to go!

Thank you for sharing this piece! In a time when the future is so uncertain, it's comforting to look back and see how love for and commitment to our communities can have such long lasting impact.

Wonderful tribute! You write beautifully, Tara. So glad you became a librarian!

I am very sure she would be proud of your work at Park Hill. Lovely tribute!

What a beautiful tribute and I am sure some day we will be reading one about you.

Thanks Tara. Your piece made me imagine the excitement of the dentist and his wife that moved into our house in 1917, eagerly awaiting the opening of the brand new, modern library!

What a lovely story. It was nice to see Hadley's name in there, too. When I worked at DPL I had the wonderful opportunity of working at Hadley and Athmar Park branches. The history of Denver's wonderful libraries is so rich and fascinating. Somehow you keep connecting with some of my happy library memories.

Absolutely love this piece! Thank you for sharing. The Bresler Family will find a way to parade past the library on this special anniversary.