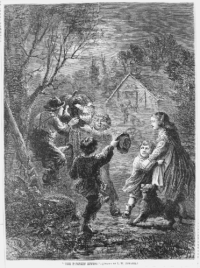 Autumn is upon us. Leaves change; scarves come out of storage; stores and restaurants burst with pumpkin-flavored options; and we feel pulled towards the thrills of horror movies and other scary stories.

Some scary stories seem like they could have actually happened because they deal with everyday life: cars, food, babysitters, malls. But they also feel like they're a little too good to be true: their plots events are just too coincidental and their resolutions are just too ironic or funny. These are called "urban legends," and they are so fascinating that a colleague and I are presenting a virtual program on the subject next week! (Go here to register.)

But what are urban legends? The phrase itself basically means "contemporary folklore." That may sound like a contradiction because "folklore" sounds old-timey, but my friend the Oxford English Dictionary tells us that folklore is very much a contemporary phenomenon. Furthermore, "urban" doesn't mean confined to cities: in this context, it just means it's not traditional folklore, i.e., it involves modern life instead of the distant past.

One of the things I do as a Reference Services librarian is study misinformation, which means inaccurate or false information that can be spread intentionally or unintentionally by people. Misinformation has been a hot topic in the public discourse for a few years, especially where politics are concerned, although it's by no means confined to the political realm. Misinformation often springs from a specific information about things like dubious scientific studies that claim chocolate milk could improve concussive symptoms (sadly, it most likely does not).

Misinformation and urban legends share a lot of traits. They are both often spread by people who believe they are true. They are both anecdotal, often socially "verified" by someone adjacent to the teller's social circle (a "friend-of-a-friend"). Most importantly for me, they both elicit strong emotions: fear, disgust, surprise. When our emotions are in the driver's seat, we're prone to move rationality to the backseat (or drive off while rationality is still in the gas station bathroom). And our emotional side compels us to share this scary, disgusting, surprising information with others.

One key difference I've found in researching urban legends is that misinformation is much, much easier to debunk. With misinformation, you can pull at a thread and follow it: fact-checkers may have already done helpful analysis, other news sources may not corroborate the claim, authors may not be experts.

Urban legends are more elusive. They seem to have happened everywhere and nowhere. In fact, the most famous scholar on the topic, Jan Harold Brunvand, used to receive reports of nearly identical urban legends from all over the country. For debunking urban legends the gold standard is Snopes, the famous debunking website that actually got its start by demystifying modern folklore in the 1990s (and, oh joy! they cite their sources).

One problem with the act of debunking is that it requires a thread to pull at: there should be a correction, retraction, analysis. Retractions of bizarre, email-forward-worthy, human-interest-type stories (as opposed to a claim made by a public figure) are rare. As part of our research for this program, I chased down un- or under-cited stories as best I could using tools like New York Times Historical Backfile, Major Daily Newspapers, or our Western History Subject Index. When that failed, I also used Snopes, Internet Archive's Wayback Machine, some really intense Googling, and even combed through Facebook comments trying to source viral videos.

In a couple of cases, I had multiple sources reference a single source without fully citing it. Sometimes persistence, the right combination of keywords, and the Wayback Machine delivered the glorious mana I sought. Sometimes, I just hit dead ends. Once I waited weeks for the 1983 book Mysterious America to come through Prospector. This book was referenced by several articles about phantom clown sightings in Denver in 1981. Once I finally had the book in hand, I discovered the original information had been sent to the author from a personal network rather than a traceable report. Chasing down informational ghosts can take up a lot of time most of us simply don't have, especially when misinformation throws your emotions into overdrive.

Most urban legends seem to have no certain origin and the search for concrete evidence can lead you to the dead end of a long and winding road. So it helps if you can engage in some prebunking, the informational equivalent of the old adage that an ounce of prevention is worth a pound of cure. Prebunking helps us understand the mechanisms that drive misinformation, whether that's how it is disseminated or whether the misinformation relies on recycled themes we've seen before.

Why does it matter if there never was a man calling from inside the house or if Neiman Marcus never had a cookie recipe? Because urban legends may be fun and fascinating, but they also express our social anxieties, and those anxieties can go to some pretty ugly places: racism, xenophobia, endangered children are a few. It's important to know these things because sometimes the shiniest apples have worms inside. And that knowledge is what exposing misinformation--in all its forms--is all about.

Got questions about urban legends or verifying information? Register for our virtual program, next Thursday, October 21, at 6:30pm. Or you can contact us by using our Ask Us service, or by calling 720-865-1111.

The image used for this blog post, "Pumpkin Effigy" by L.W. Atwarer, was originally published in Harper's Weekly in 1867 and is now in the public domain. It can be accessed here via Library of Congress.