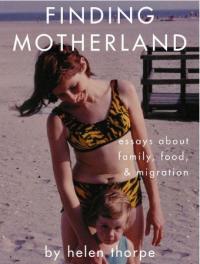 Finding Motherland: Essays about Family, Food and Migration by Helen Thorpe has just been released and is a collection of her writing from the past twenty years. While many of these essays have been published elsewhere, Thorpe relates in the preface that the “pause” many of us had to take in our lives due to the COVID-19 pandemic gave her the time to gather these together, along with fresh content, all which have themes relating to motherhood and family. Refreshingly honest and reflective, Thorpe examines her Irish roots, a peach grower on the Western slope, undocumented children, undocumented parents, and much more. Of special note, this collection is currently only available through the library in digital audio, with Thorpe narrating her own work, recorded at Denver studio Books for Life. It is also for sale as an ebook online. I had the opportunity to speak with Helen Thorpe via Zoom in early August about Finding Motherland.

Let’s start with the cover. You shared with me that this is your favorite photo of your mother - can you tell me a little bit more about it, and why this photo stands above others?

H: Yes, it’s a picture my father took at a New Jersey beach. We had just been in the United States for a short time, via England from Ireland. We’re facing west, with the ocean to our backs, which is symbolic since we had come from the opposite side of the Atlantic. And the way she and I are standing, comfortably close, and happy, is really how my relationship is with my mother. She has always been there, just behind me, neither pushing or pulling in any direction.

This line from the essay Finding Motherland caught my ear - “That’s how I accidentally became a part-time everything: part-time stay-at-home mom, part-time professional journalist, and part-time political spouse.” It seems to me that every mother goes through this in some way or another. But not every mother has the opportunity to make those choices, and you acknowledge that.

H: That’s right, and it is part of what I wanted to communicate when I wrote about the disparities witnessed at my son’s elementary school in representation of people of color at PTA meetings, social functions, and sporting events. Single parents working multiple jobs who earn barely enough to cover the rent have far fewer choices in how to use their time than do parents from more privileged positions. Being closely involved with your child’s school and education is something that most every parent would like, but circumstances simply don’t always allow it for families at the lower end of the economic spectrum.

Pablo, a teenager, is at the center of your essay on the challenges, and unfairness, of being young and undocumented. In ROTC, supported by his supervisor, he carries the flag proudly at a Rockies game, yet struggles to gain admittance to college and secure financial aid due to the lack of a social security number. His story has a happy ending, but what about those that don’t?

H: I hope that this book packs a quiet punch. If you read the essays in order, starting in Ireland and my family, I lay a groundwork for talking about the way that immigrants and refugees are treated now, in the United States. There’s an act of bearing witness I’m trying to accomplish. I try to show why we are all better off if students like Pablo earn full citizenship. I also wanted to bring attention to how lack of legal status for a parent affects their children. And then in the last essay, in its discussion of Irish Americans, I point out how these immigrants also arrived - poor, unskilled, and without papers - and how their circumstances resembled those of immigrants who are arriving today.

I admire the way you balance peach farmer Bruce Talbot’s conservative views with his connection to the fruit trees, the culture of the Western Slope, and his H2B workers. I was also jealous, imagining standing in a peach orchard with blossoms fluttering all around me! That must have been a once in a lifetime experience.

H: The orchards are incredibly beautiful and well cared for. Originally I had the idea that this project, looking at fruit growing on the Western Slope, would become a book. When I tried to shop this IDEA with publishers from the east coast, nobody had ever heard of the Western Slope, and they were positive that peaches only came from Georgia! So this story ended up becoming an essay, and indeed, it was fascinating to see the entire cycle of peach tree planting to peach harvesting. And being on the other side of the political as well as geographical divide was important to me too - I wanted to humanize some hard-working people in agriculture that were being demonized by many people with liberal leanings like me.

What about the bad freeze this year?

H: One fascinating thing that I learned from Bruce Talbot is that a hard freeze, though it may hurt the tree, doesn’t kill it, and actually results in a bigger bounty of fruit the following year. So in a way, a metaphor for bouncing back from adversity, which many of the people in these essays experience again and again.

The tenacity and determination of your friend Rosalin to thrive despite health and economic challenges seems almost superhuman, but it is what so many undocumented adults have to be in order to deal with a society where many consider people like her invisible, or even worse, dispensable. Can you elaborate on that a bit?

H: Rosalin was not only being thrifty; she was focused on making ends meet however she could. Her energy and resourcefulness was extraordinary - at one point she basically leased out her couch so she could provide for herself and her son because her rent nearly tripled in just three or four years. Because so many new arrivals to the United States lack money and the English language, everything is a double struggle for them. How do parents who only speak Somali communicate with a teacher who only speaks English? Families from different cultural backgrounds didn’t mingle easily with each other at school events primarily because they could not speak each other’s language, which definitely contributed to each of these groups becoming more isolated. It did feel wrong to me, especially at the school, that governance fell to the mostly white upper middle class parents, and though we tried, we didn’t get it figured out. Maybe we need to go to their homes. We need to do better.

I was really struck with the names of the places commemorating the Irish Potato Famine and the immigration experience - Ireland’s Great Hunger Museum, the Tenement Museum, The Famine Memorial. These seem like trophies of disaster, in a way! What a somber experience, and as you point out in the final essay, very little is known about it, partly due to the illiteracy of the people affected, and shame.

H: People know about the Famine, but few know of the scope of it - over 1 million people died between 1845-1849 from hunger. It is surprising when you visit these institutions that there is very little documentation of a poor person’s experience, but because many did not have any written language, it wasn’t recorded. There’s almost nothing from the point of view of a tenant farmer. And then, the Irish who did survive would not talk about it, so deep was their humiliation. At this very ahistorical moment, there’s some idea flying around in the ether that people arriving in the country right now are somehow different, or worse than those who arrived in the late 1800’s. Those Irish refugees arrived in the United States came with dysentery or typhus, starving, in really bad shape. Many were actually worse off than those coming into the country today.

Irish Americans who know their heritage and history should understand what it’s like to be under colonial rule and persecuted, and should be able to empathize with, more than any other nationality that has come to the United States, what has happened to Native American and African Americans here. While some can, another part has gone hard right, working in the Trump administration, and I have a hard time understanding that. I hope to bring more Irish Americans to a place of empathy with this collection.

Last question - what was it like to record your book? Hearing you read it is like sitting with a friend who has a good story to tell. I had the opportunity to visit the Books to Life studio last year, and was really delighted to learn more about their work.

H: It was an incredible experience. Books to Life is responsible for many recordings done for the Library of Congress’ National Library Service for the Blind and Physically Handicapped and the service is truly professional. They did everything possible to make me comfortable, and when I slipped up on a word, the engineer and producer would just back it up and give me another chance to do it right. It took about ten hours to record Finding Motherland, which ended up being about 5 and half hours long. I loved getting to record the essays myself.

Want to get just an earful of Helen reading from her essays? Dial into our LitLine service which features stories, essays and poetry for adults with options for both Spanish and English - Finding Motherland will be the featured essay/story from Friday AM August 21-Thursday PM August 27. 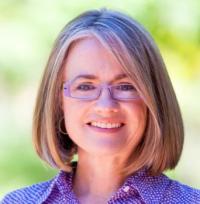