Audiobooks Begging to Be Listened To! 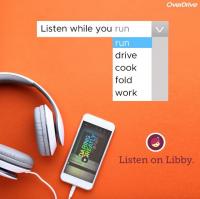 Okay, so the title is kind of dramatic, but I really want everyone to read this! First off, June is National Audiobook Month, and secondly, a recent survey done by the Audio Publishers Association (APA) demonstrates that even more people are listening to books now. Publishers Weekly reports that sales are up 12%, and per the APA, the percentage of people who took part in the survey who said home was their preferred listening spot jumped to 55% in 2020, from 43% in 2019. Not surprisingly, car listening dropped from 43% to 30% from 2019 to 2020.

That said, what should you have on your must-listen list? Audio is available through Overdrive (be sure to check out the Always Available tab!) and the Libby app. Here’s a mix of titles to consider, from family-friendly to not-so-much, tears and cheers, real-life and fantastical.

The Only Good Indians by Stephen Graham Jones just won the 2021 Bram Stoker award (8.75 hours). Ten years prior to the start of this story, four young Blackfeet went hunting on tribal lands normally reserved only for the elders and ended up killing a female Elk, oddly pregnant during the wrong time of year. Now, as adults with families and responsibilities, the men still carry the heavy guilt of that day, as well they should—the spirit of the Elk has been waiting to make each one of them pay the ultimate price. This is a heartbreakingly beautiful story about hope and survival, grappling with themes of cultural identity, family, and traditions, and is not for the faint of heart. The narration by Indigenous voice actor Shaun Taylor-Corbett is nothing short of spectacular.

This next suggestion is part horror (zombies!) and part fantasy, and all funny—Hollow Kingdom by Kira Jane Buxton (10 hours). Oh my, this book has everything. The story is told from the perspective of S.T., a crow. This is totally The Secret Life of Pets meets The Walking Dead, a big-hearted, boundlessly beautiful romp through the Apocalypse, where a foul-mouthed crow is humanity's only chance to survive Seattle's zombie problem. I saw this bit of a review and have to agree with it: “I have never laughed so hard for the end of mankind.” The next title in the series, Feral Creatures, comes out in August. Robert Petkoff's earnest reading is punctuated with joy and wonder from the perspectives of a whale, a cow, and a house cat, as well as S.T.

Perfect for a family car drive, give a listen to Garth Nix's The Left-Handed Booksellers of London (11 hours). The Booksellers are an extended clan who possess magical abilities and are tasked with intervening when mythical people and beings from ancient times break through into the modern world. Oh, and they also run a couple of bookshops in London. This definitely has a bit of a Harry Potter vibe, and Marisa Calin sounds as delighted to be reading this as I felt listening to it—her accents are spot on, and as relationships develop between characters, tone changes as well. There are some scary scenes, but know that all works out well in the end!

Tom Hazard, the main character of Matt Haig’s How to Stop Time, looks 41 but has actually been alive for hundreds of years, due to a rare condition. Forced to move every eight years to avoid detection and unable to allow himself to love, Tom is haunted by losses in his past and finding it hard to engage in the present. Voice actor Mark Meadows does a fantastic job bringing to life all of the people Hazard interacts with over the centuries, from William Shakespeare to F. Scott and Zelda Fitzgerald, Captain Cook, and more. Tom’s story unfolds both in the present day and in memories of the past as he’s forced to decide which is more difficult—to live forever or to avoid truly living at all.

Learn while you listen with Sy Montgomery’s The Hummingbirds’ Gift. This brief audio (2 hours) is a hummingbird-sized meditation on the beauty, fragility, and resilience of these charismatic birds. As the babies are carefully fed (every 20 minutes!), cleaned, and readied for release, Montgomery's warm and intimate delivery makes listeners care about each development and setback. And her descriptions of these tiny marvels will almost certainly inspire you to step outside and observe the natural world with a new appreciation.

It’s been a tough year or so, and now that so many of us are contemplating the “new normal,” there are lots more things to make us anxious. And anxiety can cause us to just shut down. Greg McKeown’s Effortless (6 hours), read by the author, is just the guide you need to help ease you into recognizing that instead of “pushing yourself harder, you find an easier path.” McKeown sets the tone in the introduction, titled “Not Everything Has to Be So Hard” (which I love, and have adopted as my internal mantra).

A solid teen choice that is sure to prompt discussion: author Elizabeth Acevedo’s fantastic title, With the Fire on High (7.5 hours). In a distinct, perceptive, and vulnerable first-person narrative, Emoni, a young single mom being raised by her grandmother while raising her own daughter, relates the story of her last year of high school in vignettes and short chapters, trading off between sharing bits of the story and her musings about her life and her future. Emoni has a gift for cooking, and her food, like magic, conjures emotions in people she shares it with. Acevedo narrates this herself and compassionately challenges listeners with a wide variety of topics, including cultural and personal identity, and fittingly, for a book so deeply about food, she also includes Emoni’s recipes.

How about a classic for kids of all ages? Versatile British actor David Walliams pulls out all the stops from his vocal repertoire to create a romping narration of Roald Dahl’s The BFG. There’s no voice too big or too small for him, whether it’s giving the Big Friendly Giant a deep, rumbling Cockney accent or endowing the queen of England with a prim and proper tone. Helping him along are well-placed sound effects sprinkled throughout—from the loud roars of evil giants to the soft tinkling of glass. The sounds enhance the wacky adventure, which only Dahl could dream up. The four-plus hours whiz by with whimsy and inspired fun.

Follow Sarah Vowell’s lead for road trip inspiration in Assassination Vacation. Vowell provides an engaging tour of historic sites associated with presidential assassinations. While searching for meaning among the brutal and sometimes banal events surrounding the deaths of Lincoln, Garfield, and McKinley, Vowell takes some wacky digressions; at one historic site, a Bermuda shorts–clad tourist resembling John Wilkes Booth bangs out a version of “Lean on Me” on an ancient piano. More than a history lesson, Vowell’s work looks at how men of violence have forced themselves upon history, changing the course of politics and power. Audiobook listeners get serious bang for their buck, including guest appearances by Stephen King (as Lincoln), Jon Stewart, Conan O’Brien, and Eric Bogosian, among others. The soundtrack by Michael Giacchino deserves a disc of its own.

Got teens? Point them to the summer SYNC free download audiobook program! Running through August 4, 2021, SYNC gives participants two thematically paired audiobooks each week. Titles are all available worldwide and change every Thursday at midnight Eastern Time during the season. 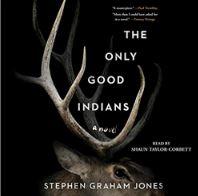 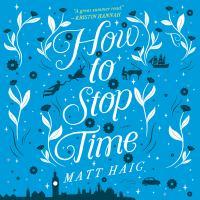 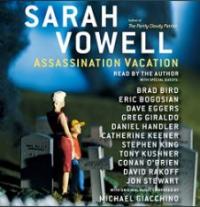