Superheroes Come in All Colors

Comics are fun to read because of the stunning art and the worlds we enter where anything is possible... if you’re white. The representation of BIPOC (Black and Indigenous People of Color) comic characters has historically been that of a supporting role; rarely did they receive their own opportunities to shine. This has been changing over the last few years and we’ve seen some really amazing superheroes and authors emerge because of it. It’s important to highlight works where BIPOC can see themselves reflected on the page as superheroes. The following list encapsulates authors of color who write superheroes of color into worlds that we may already be familiar with along with brand new worlds. There are also two graphic novels at the end of the list that fall into a non-superhero category. Like the perfect sundae, the ice cream is the superhero genre, the syrup is the horror, and the cherry is a more dramatic graphic novel to top it all off.

Black Bolt by Saladin Ahmed - An independent branch from Marvel’s Inhumans, Black Bolt follows Blackagar Boltagon (we won’t hold his name against him) as he attempts to escape a prison intended for his brother. We meet some enemies and make some friends along the way. Plus there is a giant dog.

Black Panther by Ta’Nehisi Coates - With the passing of Chadwick Boseman (who played Black Panther on the big screen) the comics and film industry has lost a huge inspiration. As one of the highest regarded and most well known black superheroes, Black Panther had to be on the list. In this revival Ta’Nehisi Coates writes the series with a focus on ancestry, world building, and perseverance. As the series progresses you may even get to see a little romance bloom between T’Challa and a well known X-Men character.

Magnificent Ms. Marvel by Saladin Ahmed - Ahmed pens this teenage superhero in an incredibly sweet, kind, and family oriented tale of how one girl gets powers and the fights and struggles that ensue. How’s a young girl to balance romance, saving the world, and keeping her parents from worrying about danger all at the same time? Ahmed tackles all this and more in Magnificent Ms. Marvel.

Shuri by Nnedi Okorafor - If you’re familiar with Black Panther then you know that Shuri is T’Challa’s nerdy younger sister. This story follows her as she takes on an alien threat while her brother is away from the Throne with the help from a couple members of the Guardians of the Galaxy crew.

World of Wakanda by Roxanne Gay - A queer telling of two of Wakanda’s most revered soldiers, the Dora Milaje. This is an action packed story with a bit of romance weaved in.

Harley Quinn: Breaking Glass by Mariko Tamaki - A truly refreshing version of Harley Quinn where the reader gets to see what Harley would have been like in high school while living with a bunch of drag queens and meeting Poison Ivy. Came for the drama, stayed for the heartwarming ingenuity.

Monstress by Marjorie Liu - A dark and spooky tale filled with war, betrayal, and talking cats. A truly subversive plot that will leave you in suspense more than once. This story is set in a 1900’s matriarchal Asia with not so subtle steampunk themes to it, a truly stunning combination of world building.

Ironheart by Eve Ewing - Chicago-based superhero Riri Williams battles more than just evil as she attempts to save a group of world leaders from one of SpiderMan's nemesis’ who is donning an Iron Man suit. She is an incredibly brilliant student and all around lonely girl. This graphic novel promises growth and butt-kicking adventure.

America: The Life and Times of America Chavez - College bound America Chavez has to figure out how to battle interdimensional monsters, and stop an alien cult with no shortage of friends and support. This series also introduces a bit of queer love and wholesome “always there for you” friendships.

A Thief Among the Trees - In this action/adventure novel, three young military recruits must face multiple challenges as they attempt to steal a special poison from Isle South, including battling their fellow recruits.

Infidel - A bit of horror to throw into the mix. This story is about an American Muslim woman navigating her neighbors, friends, and a haunted building.

Mis(h)adra - This story follows an Arab-American college student as they struggle with epilepsy. The very realistic portrayal of a the challenges with a chronic illness is made more potent by the fact that the author also struggles with epilepsy. 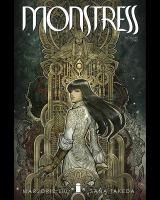