Explore the West with our Westerns Core Collection, including books that take place right in our backyard of Colorado and Wyoming!

The Lone Ranger and Tonto Fistfight in Heaven
Alexie, Sherman

In his darkly comic short story collection, the author brilliantly weaves memory, fantasy, and stark realism to paint a complex, grimly ironic portrait of life in and around the Spokane Indian Reservation. These twenty-four interlinked tales are narrated by characters raised on humiliation and government-issue cheese, and yet are filled with passion and affection, myth and dream. Against a backdrop of alcohol, car accidents, laughter, and basketball, Alexie depicts the distances between Indians and whites, reservation Indians and urban Indians, men and women, and mostly poetically between modern Indians and the traditions of the past.

The astonishing reminiscences of an ancient and immodest Indian frontiersman form a witty, lusty, and highly impressive epic, a panoramic enlargement of the way of life in the Old West.

The story of a single human life lived simply in the silence of the southwestern desert. In 1851 Father Jean Marie Latour comes to serve as the Apostolic Vicar to New Mexico. What he finds is a vast territory of red hills and tortuous arroyos, American by law but Mexican and Indian in custom and belief. In the almost forty years that follow, Latour spreads his faith in the only way he knows--gently, all the while contending with an unforgiving landscape, derelict and sometimes openly rebellious priests, and his own loneliness.

When a frontier baron known as the Commodore orders Charlie and Eli Sisters, his hired gunslingers, to track down and kill a prospector named Herman Kermit Warm, the brothers journey from Oregon to San Francisco, and eventually to Warm's claim in the Sierra foothills, running into a witch, a bear, a dead Indian, a parlor of drunken floozies, and a gang of murderous fur trappers.

Set in North Dakota at a time in the past century when Indian tribes were struggling to keep what little remained of their lands, Tracks is a tale of passion and deep unrest. Over the course of ten crucial years, as tribal land and trust between people erode ceaselessly, men and women are pushed to the brink of their endurance--yet their pride and humor prohibit surrender.

Half an Inch of Water : stories
Everett, Percival

For the plainspoken men and women of these stories--fathers and daughters, sheriffs and veterinarians--small events trigger sudden shifts in which the ordinary becomes unfamiliar. A harmless comment about how to ride a horse changes the course of a relationship, a snakebite gives rise to hallucinations, and the hunt for a missing man reveals his uncanny resemblance to an actor. Half an Inch of Water tears through the fabric of the everyday to examine what lies beneath the surface of these lives. In the hands of master storyteller Everett, the act of questioning leads to vistas more strange and unsettling than could ever have been expected.

One Thousand White Women : the journals of May Dodd
Fergus, Jim

An Indian request in 1854 for 1,000 white brides to ensure peace is secretly approved by the U.S. government in this alternate-history novel. Their journey west is described by May Dodd, a high-society woman released from an asylum where she was incarcerated by her family for an affair.

Jane Withersteen ran her cattle business and bossed the cowboys who rode the expanse of purple sage around her prosperous Utah ranch. Then she dared to disobey the Mormons who ordered her to marry grim, brutal Elder Tull. Now her stock was being stampeded and her horses stolen. but in wasn't until her men started disappearing that Jane feared she was beat. Then the mysterious gunslinger called Lassiter rode into town. He came to kill a man. He stayed to fight for a woman ... in a showdown for freedom and love. 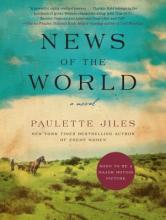 News of the World : a novel
Jiles, Paulette

In the aftermath of the Civil War, an aging itinerant news reader agrees to transport a young captive of the Kiowa back to her people in this exquisitely rendered, morally complex, multilayered novel of historical fiction that explores the boundaries of family, responsibility, honor, and trust.

The time is 1883, the place is the Texas Panhandle. Cowboys refuse to be stigmatized as drinkers and exploited by the wealthy cattle owners who don't pay liveable wages. Those very same ranchers want to take away the cowboys' right to own cattle because this ownership, the ranchers believe, would lead to thieving. So, in 1883, the dictum is set: If you're a cowboy, you can't own a cow. When rumors of such legislation travel from wagon to wagon, the cowboys decided to rally and fight for their rights--they gather together and strike.

wo men. One woman. A land that demanded courage - or death. He was a man etched by the desert's howling winds, a big, broad-shouldered man who knew the ways of the Apache and ways of staying alive. She was a woman raising a young son on her own on a remote Arizona ranch. And, between Hondo Lane and Angie Lowe was the warrior Vittoro, whose people were preparing to rise against the white men. Now, the pioneer woman, the gunman, and the Apache warrior are caught in a drama of love, war, and honor.

All the Pretty Horses
McCarthy, Cormac

All the Pretty Horses tells of young John Grady Cole, the last of a long line of Texas ranchers. Across the border Mexico beckons—beautiful and desolate, rugged and cruelly civilized. With two companions, he sets off on an idyllic, sometimes comic adventure, to a place where dreams are paid for in blood.

A love story and an epic of the frontier, Lonesome Dove is the grandest novel ever written about the last, defiant wilderness of America. Richly authentic, beautifully written, Lonesome Dove is a book to make readers laugh, weep, dream and remember. Now a blockbuster television event.

Comanche Indian captive Eli McCullough must carve a place for himself in a world in which he does not fully belong -- a journey of adventure, tragedy, hardship, grit, and luck that reverberates in the lives of his progeny.

James A. Michener’s magnificent saga of the West is an enthralling celebration of the frontier. Brimming with the glory of America’s past, the story of Colorado—the Centennial State—is manifested through its people . . . trappers, traders, homesteaders, gold seekers, ranchers, and hunters are brought together in the dramatic conflicts that shape the destiny of the legendary West—and the entire country.

House Made of Dawn, which won the Pulitzer Prize in 1969, tells the story of a young American Indian named Abel, home from a foreign war and caught between two worlds: one his father's, wedding him to the rhythm of the seasons and the harsh beauty of the land; the other of industrial America, a goading him into a compulsive cycle of dissipation and disgust.

Joe Mondragon, a feisty hustler with a talent for trouble, slammed his battered pickup to a stop, tugged on his gumboots, and marched into the arid patch of ground. Carefully (and also illegally), he tapped into the main irrigation channel. And so began-though few knew it at the time-the Milagro beanfield war.

U.S. Marshall Rooster Cogburn is hired by a 14-year-old girl to kill the man who murdered her father and stole the family nest egg. She accepts the help of the Texas Ranger, who is intent on the reward, and accompanies them on the quest.

Annie Proulx's masterful language and fierce love of Wyoming are evident in this collection of stories about loneliness, quick violence, and wrong kinds of love. In "The Mud Below," a rodeo rider's obsession marks the deepening fissures between his family life and self-imposed isolation. In "The Half-Skinned Steer," an elderly fool drives west to the ranch he grew up on for his brother's funeral, and dies a mile from home. In "Brokeback Mountain," the difficult affair between two cowboys survives everything but the world's violent intolerance.

The year is 1878, peak of the Texas cattle trade. The place is Dodge City, Kansas, a saloon-filled cow town jammed with liquored-up adolescent cowboys and young Irish hookers. Violence is random and routine, but when the burned body of a mixed-blood boy named Johnnie Sanders is discovered, his death shocks a part-time policeman named Wyatt Earp. And it is a matter of strangely personal importance to Doc Holliday, the frail twenty-six-year-old dentist who has just opened an office at No. 24 Dodge House.

The Shootist is John Bernard Books, a gunfighter at the turn of the twentieth century who must confront the greatest Shootist of all: Death. Most men would end their days in bed or take their own lives, but a gunfighter has a third option, one that Books decides to exercise. He may choose his own executioner. As word spreads that the famous assassin has incurable cancer, an assortment of human vultures gathers to feast on the corpse—among them a gambler, a rustler, a clergyman, an undertaker, an old love, a reporter, even an admiring teenager. What follows is the last courageous act in Books’s own legend.