When a small plane crash ends with a group of seven teens washed up on a deserted island, their first thought is survival. With supplies dwindling and the fear of being stranded forever becoming more of a reality, they quickly discover that being the most popular kid in high school doesn't help when you're fighting to stay alive.

And when strange and terrifying accidents start to occur all around them, the group realizes that they are being targeted by someone who was on the plane, and that the island isn't their only danger. A terrible secret from a party the night before the flight has followed them ashore―and it's clear that someone is looking for justice. Now survival depends on facing the truth about that party: who was hurt that night, and who let it happen?

Mazelina of Wexcombe has always dreamed of traveling with her father to lands beyond the confining walls of their castle. But his sudden death deprives her of the future she imagined. Abandoned by her eldest brother, Mazy is soon forced to seek help from her beloved brother Sir John at the great estate of Strachleigh.

Her visit leads to a friendship with the dashing and noble Sir Berenger of Dericott. He has notions of rescuing a damsel in distress. But Mazy is brave enough to defend herself—and has proven that her skills in archery and knife throwing rival that of a knight’s. So when he is called away to Prussian lands, Sir Berenger looks to distinguish himself in battle.

When Sir Berenger returns, he and Mazy meet again on the streets of London, where she is making a living selling goods in the market. Meanwhile, he has been summoned by the king to receive a reward for his service. But the recognition comes with a price: He must marry a wealthy, titled widow to please the king. But when Mazy begins to suspect treachery, she embarks on a journey to the fortress of snow to warn the brave knight—and secure her own fairy-tale ending.

ueer actor Lily Ashton has found fame playing lesbian warrior Morgantha on the hit TV show Galaxy Spark. Lily knows how little representation queer girls have, so when the showrunners reveal that Morgantha’s on-screen love interest, Alietta, is going to be killed off, Lily orchestrates an elaborate fake-dating scheme with the standoffish actress who plays her, to generate press and ensure a happy ending for the #Morganetta ship.

But while playing a doting girlfriend on and offscreen, Lily struggles with whether a word like “girl” applies to them at all. Their male online gaming persona, Frey, feels more authentically them than the curvy body they see in the mirror, and coming out as nonbinary to the crush they meet in an MMORPG makes them feel like they’ve got a shot at a real-world happily ever after. #Morganetta means so much to so many people, though, so Lily decides to keep presenting as female to the world and continue the dating charade. Even as they genuinely bond with their costar, they can’t ignore how much it hurts to be something they’re not.

Lily’s always been good at playing a part. But are they ready to share their real self, even if it means throwing everything they’ve fought for away? 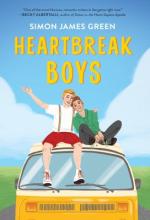 When their ex-boyfriends get together and start Instagramming a disgustingly perfect summer of love, Jack and Nate decide to concoct a mutual Insta-worthy summer adventure of their own to prove they're just fine and everything's great.

Of course, it's hard to have an epic summer road trip when they're stuck in a van with Nate's mid-life crisis-bound parents and his annoying younger sister. And it's been years since Jack and Nate have said more than a few sentences to each other. But their followers don't have to know any of that.

How hard could faking the high life be? Posting as @TheHeartBreakBoys, the duo stumbles into one hilarious situation after another--and each discover that maybe the cure for heartbreak has been the boy riding next to him all along.

A Million to One
Jaigirdar, Adiba

An acrobat, an actress, an artist, and a thief, four girls who seemingly have nothing in common, work together and plot a heist to steal the Rubaiyat off the Titanic.

Senior year at Ellingham Academy for Stevie Bell isn't going well. Her boyfriend, David, is studying in London. Her friends are obsessed with college applications. With the cold case of the century solved, Stevie is adrift. There is nothing to distract her from the questions pinging around her brain--questions about college, love, and life in general.

Relief comes when David invites Stevie and her friends to join him for study abroad, and his new friend Izzy introduces her to a double-murder cold case. In 1995, nine friends from Cambridge University went to a country house and played a drunken game of hide-and-seek. Two were found in the woodshed the next day, murdered with an ax.

The case was assumed to be a burglary gone wrong, but one of the remaining seven saw something she can't explain. This was no break-in. Someone's lying about what happened in the woodshed.

Boarding school student Talia Morris has no idea her boyfriend, Nathaniel, is a Mystic, let alone second in line to the throne of a secretive, aspirational magical community - one no mortal has ever been allowed to step inside. Until now. Nathanial's cousin is about to be married in the biggest wedding the magical world has ever seen, and Nathaniel is allowed to bring a date. Talia is the lucky recipient of the golden ticket every Mystic wannabe in the world would kill for - only she doesn't want it. Talia thinks Mystic worship is lame and stupid and unnecessarily aggrandises people for being born a certain way. When she finds out Nathaniel is 'one of them,' she almost jumps ship. But Nathaniel loves her, and she loves him. So when he begs her to give his family and their community a shot, she reluctantly agrees. Enter the most fantastical world any mortal has ever seen, and the coolest magical wedding ever.

Leelo has spent her entire life on Endla, coexisting with the bloodthirsty Forest and respecting the poisonous lake that protects her island from outsiders who seek to destroy it. But as much as Leelo cares for her community, she struggles to accept that her younger brother will be exiled by his next birthday, unless he gains the magic of enchanted song so vital to Endla.

When Leelo sees a young outsider on the verge of drowning in the lake, she knows exactly what she's supposed to do. But in a moment that will change everything, Leelo betrays her family, her best friend, and Endla by making an unthinkable choice.

Crown of Bones
Wilder, A. K.

In a world on the brink of the next Great Dying, no amount of training can prepare us for what is to come.

A young heir will raise the most powerful phantom in all of Baiseen.
A dangerous High Savant will do anything to control the nine realms.
A mysterious and deadly Mar race will steal children into the sea.
And a handsome guide with far too many secrets will make me fall in love.

My name is Ash. A lowly scribe meant to observe and record. And yet I might be destined to surprise us all...

Curse of Shadows
Wilder, A. K.

Amassia teeters on the brink of the next Great Dying. The second sun has returned as our Bone Throwers foresaw--casting the nine realms into war.

My name is Ash, and I fell in the battle for Baiseen. But I'm awake now, slowly putting the pieces back together. My Heir has lost his throne. My sailor is gone. And there is an emptiness inside me I can't explain. Amid the chaos, someone must collect the original twelve whistle bones from all corners of the world. Marcus is named to lead the cause, but with his volatile phantom, he'll need diplomacy as much as his sword. And we are not the only ones to seek the bones.

Yet succeed we must. Because if we don't, it will be death to all...