Adam and Zayneb embark on the Umrah, a pilgrimage to Mecca and Medina, in Saudi Arabia, but as one wedge after another drives them apart while they make their way through rites in the holy city, Adam and Zayneb start to wonder if their meeting was just an oddity after all.

Road of the Lost
Azad, Nafiza

Croi is a brownie, glamoured to be invisible to humans. Her life in the Wilde Forest is ordinary and her magic is weak--until the day that her guardian gives Croi a book about magick from the Otherworld, the world of the Higher Fae. Croi wakes the next morning with something pulling at her core, summoning her to the Otherworld. It's a spell she cannot control or break.

Forced to leave her home, Croi begins a journey full of surprises...and dangers. For Croi is not a brownie at all but another creature entirely, enchanted to forget her true heritage. As Croi ventures beyond the forest, her brownie glamour begins to shift and change. Who is she really, who is summoning her, and what do they want? Croi will need every ounce of her newfound magic and her courage as she travels a treacherous path to find her true self and the place in the Otherworld where she belongs.

We Are All We Have
Budhos, Marina

After her mom is taken by ICE, seventeen-year-old Rania's hopes and dreams for the future are immediatly put on hold as she figures out how take care of her younger brother and survive in a country that seems to be closing around them.

From the author of To Kill a Kingdom comes Princess of Souls, a Rapunzel-inspired YA fantasy romance about a teen witch groomed to steal souls for an immortal king and the reckless, rebellious boy to whom her fate is tied.

Strike the Zither
He, Joan

A Scatter of Light
Lo, Malinda

The summer of 2013 in the Bay is a momentous one for eighteen-year-old Aria Tang West, for the working-class queer community she finds herself in, and for her artist grandmother.

Night of the Raven, Dawn of the Dove
Mehrotra, Rati

Bound to the queen of Chandela by a forbidden soul bond that saved her when she was a child, Katyani has never fallen short of what's expected of her--becoming the best guardswoman the Garuda has ever seen and an advisor to the crown prince when he ascends to the throne. But when the latest assassination attempt against the royals leaves them with a faceless body and no leads to the perpetrator, Katyani is unwillingly shipped off to guard the Chandela princes in Acharya Mahavir's esteemed monastic school in Nandovana, a forest where monsters have roamed unchecked for generations.

Katyani wants nothing more than to return to her duties, especially when the Acharya starts asking questions about her past. The only upside of her stay are her run-ins with Daksh, the Acharya's son, who can't stop going on about the rules and whose gaze makes her feel like he can see into her soul. But when Katyani and the princes are hurriedly summoned back to Chandela before their training is complete, tragedy strikes and Katyani is torn from the only life she has ever known.

I Was Born for This
Oseman, Alice

For Angel Rahimi life is about one thing: The Ark -- a boy band that's taking the world by storm. Being part of The Ark's fandom has given her everything she loves -- her friend Juliet, her dreams, her place in the world. Her Muslim family doesn't understand the band's allure -- but Angel feels there are things about her they'll never understand.

Jimmy Kaga-Ricci owes everything to The Ark. He's their frontman -- and playing in a band with his mates is all he ever dreamed of doing, even it only amplifies his anxiety. The fans are very accepting that he's trans -- but they also keep shipping with him with his longtime friend and bandmate, Rowan. But Jimmy and Rowan are just friends -- and Rowan has a secret girlfriend the fans can never know about. Dreams don't always turn out the way you think and when Jimmy and Angel are unexpectedly thrust together, they find out how strange and surprising facing up to reality can be.

Sisters Nidhi, Avani, Sirisha, and Rani experience romance and coming-of-age while working at their family's inn on Orcas Island.

Sixteen-year-old Sayers Wayte has everything--until he's kidnapped by a man who takes it all away. A man who tells him that the privileged life he's been living is based on a lie.

To survive, Sayers must forget the world he once knew and play the part his abductor has created for him. But as time goes by, the line between fact and fiction blurs, and Sayers begins to wonder if he can escape without losing himself entirely.

Horror fans will get their thrills in this collection - from werewolves to vampires to zombies - all the time-worn horror baddies are there. But so are predators of a distinctly American variety - the horrors of empire, of intimate partner violence, of dispossession. And so too the monsters of Rogers' imagination, that draw upon long-told Cherokee stories - of Deer Woman, fantastical sea creatures, and more. 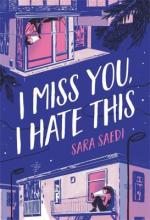 I Miss You, I Hate This
Saedi, Sara

Best friends Parisa Naficy and Gabriela Gonzales grapple with the complexities of their relationship even while they spend their senior year apart due to a pandemic that disproportionately affects young people.

The First to Die at the End
Silvera, Adam

It's the night before Death-Cast goes live, and there's one question on everyone's mind: Can Death-Cast actually predict when someone will die, or is it just an elaborate hoax?

Orion Pagan has waited years for someone to tell him that he's going to die. He has a serious heart condition, and he signed up for Death-Cast so he could know what's coming.

Valentino Prince is restarting his life in New York. He has a long and promising future ahead and he only registered for Death-Cast after his twin sister nearly died in a car accident.

Orion and Valentino cross paths in Times Square and immediately feel a deep connection. But when the first round of End Day calls goes out, their lives are changed forever--one of them receives a call, and the other doesn't. Though neither boy is certain how the day will end, they know they want to spend it together...even if that means their goodbye will be heartbreaking.

Months after the devastating battle between the Sons of St. Druon and the witches of Haxahaven, Frances has built a quiet, safe life for herself, teaching young witches and tending the garden within the walls of Haxahaven Academy. But one thing nags; her magic has begun to act strangely. When an opportunity to visit Paris arises, Frances jumps at the chance to go, longing for adventure and seeking answers about her own power.

Once she and her classmates Maxine and Lena reach the vibrant streets of France, Frances learns that the spell she used to speak to her dead brother has had terrible consequences--the veil between the living and the dead has been torn by her recklessness, and a group of magicians are using the rift for their own gain at a horrifying cost.

To right this wrong, and save lives and her own magical powers, Frances must hunt down answers in the parlors of Parisian secret societies, the halls of the Louvre, and the tunnels of the catacombs. Her only choice is to team up with the person she swore she'd never trust again, risking further betrayal and her own life in the process.

In this contemporary retelling of Anne of Green Gables, Anne Shirley, a queer, half-Japanese disco superfan, moves to a town that seems too small for her big personality and where she becomes embroiled in a series of dramatic and unfortunate events.

Nothing Sung and Nothing Spoken
Tyndall, Nita

In World War II Berlin, under the shadow of the Nazi regime, a group of German girls become involved in the Swing Youth resistance movement.

The Cloudkiss Killer is dead. Now a true-crime podcast is hosting a contest to find his bones.

Lucy was almost the serial killer's final victim. Carolina is a true-crime fan who fears her own rage. Maggie is a psychology student with a little too much to hide.

All of them are looking for answers, for a new identity, for a place to bury their secrets.

But there are more than bones hiding in the shadows...sometimes the darkness inside is more frightening than anything the dead leave behind.