"Puerto Rico Strong is a comics anthology that explores what it means to be Puerto Rican and the diversity that exists within that concept, from today's most exciting Puerto Rican comics creators." 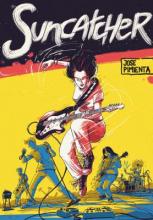 "Beatriz loves music. More than her school, more than her friends, and definitely more than her homework. After Beatriz discovers that her grandfather's soul is trapped in his guitar, she becomes determined to get him out. But the only way to free him is to play the perfect song...his perfect song, a song that he never actually wrote down. Fixated on freeing her grandfather, music slowly consumes Beatriz's life. She soon finds herself growing obsessed with perfection at the expense of her friendships, her band, and her health. Beatriz won't let anything stop her. Even if it means losing everything else." 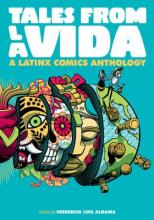 "Collection of comics created by Latinx artists and writers that comes together to shed light on their various autobiographical experiences as situated within the language, culture, history, and sociopolitics that inform Latinx hemispheric identities and subjectivities." 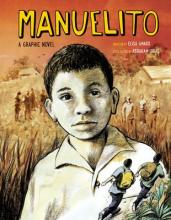 "The powerful story of a child refugee seeking asylum in America Thirteen-year-old Manuelito is a gentle boy who lives with his family in a tiny village in the Guatemalan countryside. But life is far from idyllic: PACs--armed civil patrol--are a constant presence in the streets, and terrifying memories of the country's war linger in the villagers' collective conscience. Things deteriorate further when government-backed drug gangs arrive and take control of the village. Fearing their son will be forced to join a gang, Manuelito's parents make the desperate decision to send him to live with his aunt in America. With just a bus ticket and a small amount of cash in hand, Manuelito begins his hazardous journey to Mexico, then the U.S., in search of asylum. But in the end, dangers such as the crooked "coyote"--Or human smuggler--his parents have entrusted their son's life to may be nothing compared to the risks Manuelito faces when he finally reaches America. Manuelito's titular character is just one of the staggering one hundred thousand children from the Northern Triangle of Central America--Guatemala, El Salvador, and Honduras--who have made this perilous journey to escape their war-torn countries. Many are now detained in Mexico, separated from their parents and without access to lawyers, facing the unthinkable prospect of being sent back to the homes and danger they risked so much to escape. Drawing on years of experience working with child refugees like Manuelito, Elisa Amado's powerful story, illustrated with striking poignancy by Abraham Urias, brings to light the dire circumstances of so many children, so close to home."

"Miles Morales is hitting the big time! Not only is he joining the Marvel Universe, but he's also a card-carrying Avenger, rubbing shoulders with the likes of Iron Man, Thor, and Captain America! And he'll soon be a media sensation in this All-New, All-Different New York. One thing's the same, though: non-stop action! Like when Earth's Mightiest heroes all fall, and Miles stands alone against a villain with the power to destroy the universe. Or when the Black Cat tries to get her claws in this new Spider-Man. Or when a new mutant threatens to grab the spotlight! And don't forget Miles' toughest foe yet: his grandmother! But his grades might be the ultimate challenge -- so maybe a study session (date?) with Ms. Marvel will help? Welcome to the neighborhood, Spider-Man -- hope it's friendly!"

"Olive and her adopted siblings, Darwin and Charlotte, are spending the summer with their estranged grandma at her creepy hotel and it's all work and no play. They're stuck inside doing boring chores but they soon stumble upon an incredible secret... The simple turn of a knob transports them to a distant magical world filled with space pirates. Behind the next door are bearded wizards. Down the hall is a doorway to a cotton-candied kingdom. But once the doors are opened, worlds start colliding, and only one family can save them before they tear themselves apart." 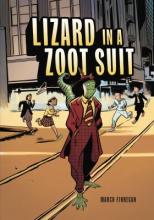 "In Southern California, during World War II, twin sisters Flaca and Cuata are harassed by soldiers stationed nearby, but a bigger problem arises when the lost member of an underground species, shaped like a five-foot-tall lizard, needs the sisters' help."

"Annie is a smart, antisocial lesbian starting her senior year of high school who's under pressure to join the cheerleader squad to make friends and round out her college applications. Her former friend BeeBee is a people-pleaser, a trans girl who must keep her parents happy with her grades and social life in order to maintain their support of her transition. Through the rigors of squad training and amped up social pressures (not to mention micro-aggressions and other queer youth problems), the two girls rekindle a friendship they thought they'd lost and discover there may be other, sweeter feelings springing up between them."

"At last! Everyone's favorite no-nonsense powerhouse, America Chavez, gets her own series! Critically acclaimed young-adult novelist Gabby Rivera and all-star artist Joe Quinones unite to shine a solo spotlight on America's high-octane and hard-hitting adventures! She was a Young Avenger. She leads the Ultimates. And now she officially claims her place as the preeminent butt-kicker of the entire Marvel Universe! But what's a super-powered teenager to do when she's looking for a little personal fulfillment? She goes to college! America just has to stop an interdimensional monster or two first and shut down a pesky alien cult that's begun worshipping her exploits before work can begin. Then she can get on with her first assignment: a field trip to the front lines of World War II - with Captain America as her wingman!"

"Juliet Milagros Palante is leaving the Bronx and headed to Portland, Oregon. She just came out to her family and isn't sure if her mom will ever speak to her again. But don't worry, Juliet has something kinda resembling a plan that'll help her figure out what it means to be Puerto Rican, lesbian and out. See, she's going to intern with Harlowe Brisbane - her favorite feminist author, someone whose last work on feminism, self-love and lots of other things will help Juliet find her ever elusive epiphany. There's just one problem--Harlowe's white, not from the Bronx and doesn't have the answers. Okay, maybe that's more than one problem but Juliet never said it was a perfect plan... Critically-acclaimed writer Gabby Rivera adapts her bestselling novel alongside artist Celia Moscote in an unforgettable queer coming-of-age story exploring race, identity and what it means to be true to your amazing self. Even when the rest of the world doesn't understand." 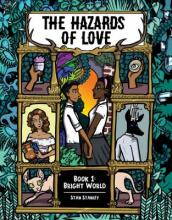 "Dodge City is a YA sports comedy about making sense of a chaotic world and growing up against the insane backdrop of competitive dodgeball, told through the eyes of oddball Tomás and his teammates. Life comes at you fast, but dodgeballs come way faster! Tomás is a teenage misfit, but when he joins the Jazz Pandas dodgeball team, he's thrown into a family of oddballs and outcasts who are willing to do whatever it takes to win the summer regional dodgeball championships. Through a season of highs, lows, and blows to the face, Tomás might finally find a place where he truly belongs, and the person inside himself he didn't know he could be."