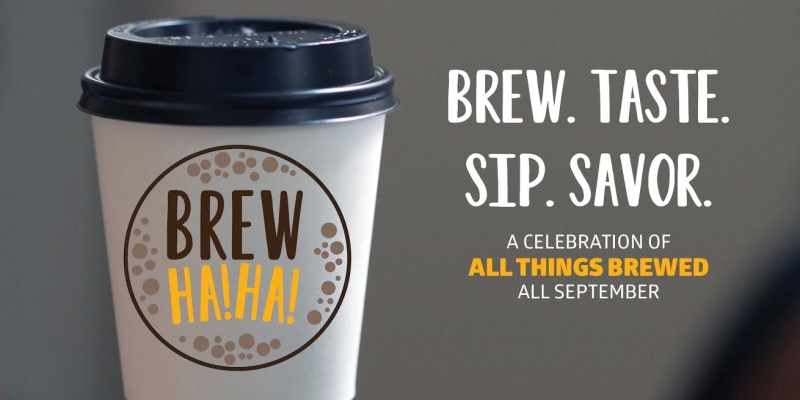 This September we're opening our doors and taking to the streets to get brewing, and you're invited. BrewHa!Ha! is a celebration of maker-culture. From the delicious smell of a fresh cup of coffee, to the quiet conversations had over tea, to the social scenes created around craft beer and kombucha, to the ideas that flow from a start-up collective, Denver loves to brew!

This limited edition blend of coffee from multiple regions tastes like sweet fruit, berry and chocolatey goodness. Pick up a bag of 641.3373 all month long at participating Huckleberry Roasters cafe locations and coffee shops around Denver. Also, receive 10% off your coffee drink of choice at both Huckleberry Roasters cafe locations, all month long, with your Library card.

We're excited to celebrate BrewHa!Ha! with Denver Beer Co. over a glass, a pint and a keg of Denver Public Library inspired brew. This limited edition kettle sour blended with black currants was created just for us, and once it’s gone, it’s gone. So get it while it’s cold, and available, beginning Thursday, September 3, at the release party. Remember to bring your Library card for $1 off your pour and ask for Sour 641.23.

Fiction Beer Company has created “Third Eye Library & Herbs,” a specialty brew inspired by Denver Public Library. We think you’ll love this flavorful and satisfying cream ale. It features the earthy herbal flavor of caraway that blends perfectly with the sweetness of poached pears, turning this style of beer on its head. Join Denver Public Library and local author Kevin Hearne at Fiction Beer Company Friday, September 4 and get $1 off your first beer when you show your Library card.

Kombucha with the City Librarian

Get an overview of how to make kombucha from Happy Leaf Kombucha experts and enjoy samples during a tasting with the City Librarian, our resident kombucha enthusiast.

Enjoy a cup of coffee on us! Bean Machine will show up in unexpected places throughout Denver like retail shops, museums, campuses and popular parks offering free, freshly brewed coffee. Get it while it’s hot.

It’s a night of music featuring local bands from Denver Public Library’s Volume project. Cop Circles and Thug Entrancer will be playing at music venue, eatery & art bar Syntax Physic Opera. Customers who show their Library cards (and ID's - must be over 21) at the door will get in free!

Renegade Brewing is partnering with Sexpot Comedy and the Denver Public Library to present a hilarious hybrid of a beer fest and comedy show where you get to sample from 10 breweries. Then enjoy three full pours (flash your Library card for a fourth pour) during the show. The laughs begin with the funniest brewers in town followed by Denver’s best acts in stand-up and a national headliner. A donation of 100% of the event profits benefit the Denver Public Library Friends Foundation.

Shop these Denver area Whole Foods Markets on September 23 and 5% of your purchase will be donated to Denver Public Library Friends Foundation! While you’re there, between 7 a.m.- 4 p.m., be sure and flash your Library card to get a FREE, small, self-serve coffee.

Stop by El Toro the Tot food truck September 13-26 and try their “All Things Brewed” coffee and ancho rubbed beef burger. Visit the website to find out where they’ll be each day. A donation of 20% of the proceeds from this specialty burger will benefit the Denver Public Library Friends Foundation.

Enjoy three, 3oz. sample pours for $3 each. Additional samples are just $1 each. Great Divide is donating 100% of the September proceeds from these sample-sized pours to be divided between Denver Public Library Friends Foundation and Urban Peak.

Pick your piece, roll the dice and have a pint when our monthly adult game night moves off-site for a special event at the Copper Kettle Brewing Company. It will be a night of games and beer, with $1 of every pint sold donated to the Denver Public Library Friends Foundation as part of Copper Kettle’s “Pints for Purpose” program.

Donating $1 for every drink purchased during September when you show your Library card.

It’s time for some alchemical fun as we brew herbal potions. We will create an aromatherapy blend to take home and discover the tasteful delights of herbal elixirs. Seating capped at 15, so arrive early!

Sample a well-known coffee prepared five different ways on a beautiful September morning. Learn tips from the experts at Copper Door Coffee Roasters using items you may already have at home, as well as tools you may not have seen since chemistry class!

Put your Minecraft brewing skills to the test! Can you create a powerful potion that also tastes good? Come experiment with us.

Join founder Scott Witsoe of Wit’s End Brewing as he talks about his journey from home brewer to professional brewer. There will be an introduction to the brewing process and a discussion of beer styles.

Sample and learn how to make traditional beverages such as Champurrado, Ponche and Cafe de Olla. ¡Salud!

Get inspired and tempt your taste buds with talented, local caterer Monica Kadillak.

Coffee is the perfect ingredient, not only for a good morning, but in a variety of dishes you’ll learn how to cook. Both coffee lovers and those who just like the smell will appreciate these delicious foods.

Not just for the British! Learn how to incorporate tea into entrees, desserts and beverages.

Beer is not just for drinking but cooking, too! Lose the alcohol and gain great flavors.

Join Whole Foods experts as we sample and explore delicious coffees and chocolates.

Coffee with the Stapleton Roasters

Coffee cupping is the industry standard for judging a brew’s flavor and overall quality. Participants will learn basic tasting vocabulary and skills, and then use these skills to sample some of Denver’s top coffee roasters, including Copper Door, Corvus and Kaladi Coffee.

Come learn about coffee from Starbucks baristas. Taste a variety of Starbucks coffee, get recommendations for food pairings and learn about the different roasting and brewing processes.

We will hand sew a set of burlap coasters to hold your morning cup of coffee. All supplies provided.

Active Minds: The Story of Beer

Join Active Minds as we tell the story of beer. We will discuss the origins and history of beer, how it is made, different types of beer, as well as the rise of several great American brewers and beer families. We will end with a discussion of the current trends of microbrews and craft beers and their strong Colorado connections. Cheers!

Stephen Brown is a tireless artisan who creates ingenious craft experiences with glue, scissors, glitter and creativity. He’s hosting two special workshops for our 2015 Camp Gitchacrafton – pick your favorite and enjoy the fun. In celebration of BrewHa!Ha!, Whole Foods Market is bringing brews and nibbles. Coffee, root beer and ginger beer to sip, and an assortment of sweet nibbles all with a twist on coffee-flavored goodness.

Tea leaf reading is an ancient and magical art that taps into the rich world of the psyche, giving insight, guidance and creative prompts. Shaheen Miro will guide us through this rewarding and insightful process.

Active Minds: The Story of Tea

Other than water, tea is the most widely consumed beverage in the world and one of the oldest, tracing its roots (so to speak) to at least the 5th century BCE. Join Active Minds as we tell the story of tea, including the role it played in colonial empire building, the different types of tea, how it is grown and processed, who grows and drinks the most (which are not the same) and much more.

Receive special discounts at our favorite spots throughout the city just by flashing your Denver Public Library card. Be sure and ask for offer specifics at each location.

1111 Broadway St., Suite 101
Near the Ross-Broadway and Byers Branch Libraries and the Central Library

Receive 50% off or buy one get one free during September

The Bistro at Stapleton

Free cup of Stapleton Roaster’s drip coffee with any entrée purchase or receive 50¢ off a cup of coffee without a purchase, September 13-19

20% off coffee drinks and beer (check back for exact dates)

$1 off pints the first week of September

1450 S. Broadway
Near the Ross-Broadway and Decker Branch Libraries

$1 off pints during September

Coffee at the Point

10% off during September (excluding wine and beer) and free 12 oz. coffee on September 15

1450 S. Broadway
In the Central Library

$1 off a pour (not a pint) during September

1695 Platte St.
Near the Central Library and Ross-Broadway Branch Library

10% off beer during September

955 Lincoln St.
Near the Ross-Broadway and Byers Branch Libraries and the Central Library

3845 Lipan St.
Near the Smiley and Woodbury Branch Libraries and the Central Library

10% off coffee and alcohol during September

$1 off first beer the week of September 13

15% discount the week of September 13

4436 W. 29th Ave.
Near the Smiley and Woodbury Branch Libraries

$1 off pints of beer during September