Rap up a career 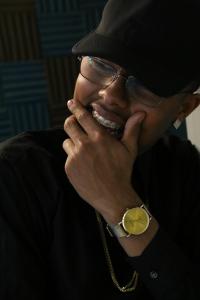 If you ask 18-year-old SirDevon Dysart his plans for the future, be prepared for an answer beyond his years.

“When it comes to business, I have a lot to learn,” says the high school senior. “But I am planning strategically.”

Wearing a grey cardigan and a killer smile, SirDevon says he is willing to do whatever it takes to achieve his dream of becoming a successful musician.

This bright young man, who shows up early to appointments and has the polite manners of someone who has been taught well, says he has always known what he wanted to do with his life.

But there were challenges. A lack of money was at the top of the list.

“It all changed when my mom told me she heard you could record music at the library,” he says. “For free!”

SirDevon came to the Central library’s SM Energy ideaLAB and made his first-ever recording, and the rest as they say, is history.

Now, SirDevon writes, records, entertains. And he spends time being grateful to his mom.

“My mom is so supportive,” he says. “She makes sure I am taking the right path.”

Indeed, SirDevon seems headed in the right direction.  He opened for rap musicians E-40, T.I. and Kid Ink at KUBE 93 2015 Seattle Summer Jam, an annual hip-hop fest, and for SirDevon, the thrill of a lifetime.

“But, I don’t take anything for granted,” he says, adding, “I am always grateful.”