This Land is Your Land: Public Lands in the United States 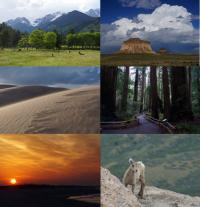 September 28 is National Public Lands Day: a nationwide day of volunteer service and free admission to public lands. Whether you want to volunteer or just visit, there are plenty of public lands to choose from in the western United States: national forests and grasslands, national parks, wilderness areas, wildlife refuges, vast Bureau of Land Management (BLM) areas, and more.

As the map to the left shows, the vast majority of public lands in the contiguous United States are federally-owned lands in the western states stretching from the Rocky Mountains to the Pacific Ocean. Almost half (46.9 %) of the land in these states is federal land, and most of that is publicly accessible to part-owners like you and me. For someone like me, who grew up in the southeast--where the landscapes are less dramatic and more likely to have “No Trespassing” signs--the abundance of public land in the west seems like an endless gift. It’s why I live here.

But federal ownership of public lands in the west is also a source of controversy (library card required). One issue in the news recently is that the BLM headquarters is moving from Washington, DC to Grand Junction, Colorado. Supporters of the move point out that BLM lands are entirely in the west, so it makes sense to have the headquarters here. Detractors say the move is part of an effort to weaken the BLM’s mission of ensuring that grazing, mining, and other extractive activities on its lands are done sustainably. Another controversy is about whether the federal government should own all this western land in the first place. Some people argue that most federal lands should be transferred to the states or sold to the public. These controversies can sometimes lead to armed conflict, as with the standoffs in Nevada and Oregon between the Bundy family (and their allies) and the federal government.

Public lands can be confusing as well as controversial. Federal public lands are maintained by multiple agencies with differing missions, and there are also public lands at the state and local level, like state parks and Denver’s city and mountain parks. Public lands, especially in the west, can be a confusing patchwork of areas with very different rules and goals. On many BLM and Forest Service lands, you can ride off-road vehicles, shoot guns, and camp by the side of the road. But you wouldn’t want to try that in a national park, and you certainly wouldn’t want to try on a military installation. Area 51 might be publicly owned, but it certainly isn't publicly accessible.

To clear up this confusion, let’s start with some basic questions: who manages federal public lands, for what purposes? While lands owned by state and local governments count as public lands, let’s focus on the federal lands. Most publicly-accessible federal lands are managed by four agencies:

Wilderness areas are created by Congress, under the the Wilderness Act of 1964, which states that a wilderness is "an area where the earth and its community of life are untrammeled by man, where man himself is a visitor who does not remain". Wilderness areas are meant to be truly wild, and activities on them are tightly restricted. For example, you can't take motorized vehicles or even mountain bikes into them. Like national monuments, wilderness areas may be managed by different agencies.

If you want to learn more about public lands, and how to find and enjoy them, here are some useful resources:

Two online resources are useful for getting an overview where public lands are in Colorado and west. The US Geologic Survey's Protected Areas Database is an interactive viewer that lets you see the boundaries of government-owned lands, which agency runs them, and whether they are publicly-accessible. The Public Lands Interpretive Association also has an interactive map. It has the advantage of showing campgrounds and other recreation sites, but it can be a little slow to load. If you prefer old-school paper maps, it's hard to beat the Colorado Atlas and Gazetteer, with 104 pages of detailed maps showing public lands, topographic features, roads, and recreation areas. The library also has a wide range of paper maps you can check out, by the BLM, NPS, USFS, and USGS, as well as the excellent Trails Illustrated maps by National Geographic. Just contact us and we can help you find those.

One good way to understand how public lands work, and why so much of the west is federally-owned, is to read about the history of public lands in the United States. This article is a good overview of this complicated topic: America's Public Lands: Origin, History, Future

For more information about the different types of public lands, here are some good articles:

America's Public Lands Explained / US Department of the Interior

Your Guide to America's Public Lands / Outside Magazine

America's public lands : from Yellowstone to Smokey Bear and beyond

Land that We Love: Americans Talk about Public Lands

Grand Canyon for Sale: Public Lands Versus Private Interests in the Era of Climate Change

From Conquest to Conservation: Our Public Lands Legacy 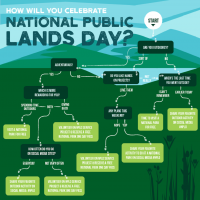 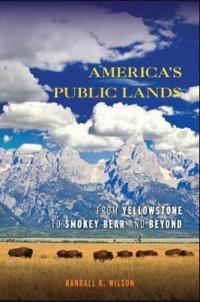