Getting Down to Brass Tax: Spoonerisms, Malapropisms, Mondegreens and Eggcorns 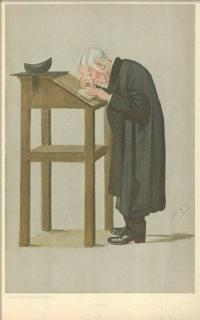 Is it a pigment of my imagination, or is proper use of the English language being taken for granite these days? It's not that surprising we all make language gaffes, and English is notoriously difficult to learn as a second language, considering the many oddities it has, such as their, there, they're, and there're or idioms such as "barking up the wrong tree."

But don't lose your ghoul if you sometimes muddle a metaphor. Some types of fractured speech are so distinctive—and intriguing, in their own way—that they've actually attracted a certain amount of research and amusement.

The term Spoonerism (a blooper in speech when people accidentally transpose the beginning letters of two or more words) is named for the British clergyman and educator Reverend William Archibald Spooner (1844–1930).  An albino, his humorous transpositions may have been due to poor eyesight, resulting in difficulty reading.  Spooner was beloved in Oxford for his kindness and witty lectures, and his students started a fad creating Spoonerisms, which they attributed to him, creating his apocryphal legacy.  Spooner only admitted to one, which was when he confused the title of a hymn "Kinkering Kongs Their Titles Take," rather than "Conquering Kings Their Titles Take."  A more current example would be from George Carlin:  "Don't sweat the petty things and don't pet the sweaty things."

A malapropism, on the other hand, happens when a word is substituted with another word that sounds similar but means something completely different. It comes from the character Mrs. Malaprop in a 1775 play called The Rivals, written by Richard Brinsley Sheridan.

“A leper never changes his socks.” —Rose McFadden, a character from the novels of Irish author Christina McKenna.

"He hits from both sides of the plate. He’s amphibious." —Yogi Berra.

Malapropisms are not to be confused with "mixed metaphors," however, which is when someone combines or mixes two metaphors:

"She sold him under the bus."

"We'll burn that bridge when we get to it."

In a 2014 New Yorker article, Excuse Me While I Kiss this Guy, Maria Konnikova explores the science of mondegreens, which is when you mishear phrases or song lyrics, making an aural flub rather than a spoken one. (The term originated in 1954 from American writer Sylvia Wright, who, as a child, misheard a Scottish ballad as "...and laid him on the green" as, "...and Lady Mondegreen".)

Konnikova explains, "One of the reasons we often mishear song lyrics is that there’s a lot of noise to get through, and we usually can’t see the musicians’ faces. Other times, the misperceptions come from the nature of the speech itself, for example when someone speaks in an unfamiliar accent or when the usual structure of stresses and inflections changes, as it does in a poem or a song. What should be clear becomes ambiguous, and our brain must do its best to resolve the ambiguity."

In addition to the well-known misheard lyrics "There's a bathroom on the right" and "Excuse me while I kiss this guy," you can check out the internet archive KissThisGuy for more than 120,000 more examples.

Eggcorns are relatively new to the doggy-dog world of linguistics, originating in 2003 when linguist and blogger Mark Liberman mentioned the case of a women who thought the word ‘acorn’ was actually ‘eggcorn.’  They're similar to malapropisms in that wrong words are substituted for right ones, but they actually make sense, and are often more descriptive than  the original. They can be unconscious; sometimes your computer just types the wrong word, which is what happened to author, editor and blogger Andrew Sullivan when he wrote "But it could give the neocons a new leash on life, a way to invigorate their exhausted ideological engines."  Or they can be uttered unwittingly, such as when Archie Bunker said, "I can't believe your mother made me go with her to the groinicologist."

If you're on thin ice and don't want to end up in hot water, contact Reference Services and we'll recommend, interpret, and evaluate resources to help you with your information needs.

Thanks for a fun read!

Thanks!  I tried to include a few antidotes to make it interesting.

Your blogs are the bestliest!

Why thank you - the world is your lobster when a blog goes smoothly!

This blog made me LOL!

Thanks, Maryanne.  Lots of luck to you as well!

Thanks for your comment, Suzanne.  Yes, it was a Labor of Love...

Thanks - I like writing blogs even though it's not rocket surgery!