The Library will be closed November 26-27 for the Thanksgiving Holiday. More Information

From Astrobiology to Zombies: Graphic Novels Created by the U.S. Government 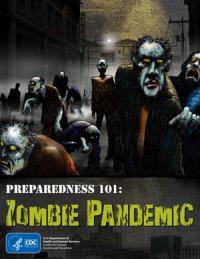 According to a 2011 Phi Delta Kappan article, Comic Books’ Latest Plot Twist: Enhancing Literacy Instruction (available through Academic Search Premier with your library card), research shows that comic books and graphic novels are useful and appealing formats that allow students, especially those who struggle with text, to grasp new and complex ideas and opinions.

The U.S. government recognized this as far back as 1918, when the Committee on Public Information created the Bureau of Cartoons, which was launched to support the war effort and promote pro-government propaganda. Though the Bureau was short-lived (it was disbanded after a year), its legacy of disbursing information about complicated subjects in an accessible way lives on.

During World War II, the creation of governmental comic books was done in a more-covert way, through the formation of a seemingly independent organization, the Writers' War Board. It was actually funded by, and received direction from, the Office of War Information, a federal agency. This arrangement allowed the government to disburse racist, bold, anti-German, anti-Japanese and anti-fascism messages, leaving readers in the dark about the real source of the information.

The Vietnam War had large numbers of soldiers sent to combat with varying levels of expertise with their M16 rifles. The M16 Comic Book Training Manual was created and distributed to every serviceman to educate them on cleaning and servicing their weapons. The lessons titles are smutty ("Cues from Guys Who Know", "Sweet 16", "How to Strip your Baby") and are taught by a buxom blonde.

Today, the U.S. government publishes graphic novels on a large variety of topics ranging from consumer awareness to the environment to Social Security:

Want to learn more? Check out the book Government Issue: Comics for the People, 1940s-2000s, by Richard Graham.