The Library will be closed November 26-27 for the Thanksgiving Holiday. More Information

It's Time to Get Creative (Again!) 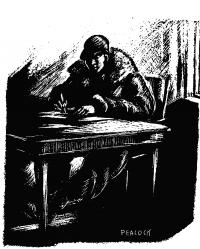 My favorite TV show, bar none, is Mad Men. I re-watch the entire series at least once a year. The show is set in the world of a New York advertising firm and takes place between 1960 and 1971. At the center of the show is Don Draper, his firm's creative powerhouse, known for his incredible ability to win clients' hearts and minds to sell their products. I don't want to give too much away, but at one point there is a character who abandons her burgeoning success in advertising to pursue her longtime artistic dream of being an actress. She becomes depressed at her lack of success, and she receives a hard truth from her mother: "Not every little girl gets to do what she wants. The world cannot support that many ballerinas."

I think about this quotation often. Ten years ago, I thought I would become a writer—probably a fiction writer, but maybe an essayist. Creative writing classes were my undergraduate life force. At the start of my senior year, I submitted an application to write a creative work as my senior thesis (as opposed to the typical, analytical thesis for most English majors). I tried not to let the "no" I received from the committee shatter me, but it did. I spent a year writing an eighty-page document analyzing a novel instead. I'm proud of myself now, but for years that achievement was overshadowed by what I thought was my ultimate failure.

After college, a friend and I started a blog dedicated to creative writing, but we both had other work. I joined a writing group through a friend. I really missed writing and critiquing and it was invigorating to feel creative again. The blog and the group both died out: we all got different jobs, and/or got priced out of Denver, and/or birthed progeny. I got stuck in an office-job rut that gave me tendinitis and depression. I joined Lighthouse Writer's Workshop and took a class, but then let my membership lapse. I had started my first job at the library and wound up getting a Master of Library and Information Science instead of an Master of Fine Arts in Creative Writing. (And the benefit of an MFA is a topic of much debate.)

I often joke that the culmination of all that creative writing training is writing work emails or staff training or slightly self-indulgent blog posts (ahem). Writing seemed like my dream by nature; librarianship became my dream by nurture. I was conflicted about giving up. I felt mostly like a coward for not really trying as hard as I could to get work out, somewhat like a sell-out for devoting my time and psychic energy to the path of steady income, and vaguely suspicious that I simply do not have enough talent and would have failed no matter what. At some point, I felt like I had to slay the writing dream to move forward. I got back into knitting and reading, I took up video games and needlepoint. There are times when I get really frustrated with these pastimes: I follow a pattern or a quest or a narrative someone else has written. It leaves me with the feeling that something is missing.

And of course, I still write every day (I'm doing it right now), but always where someone else sets the tone. I missed the feeling of having a purely creative outlet instead of cramming creativity into a PowerPoint presentation. I thought about going through Julia Cameron's The Artist's Way and read Carrie Battan's reflection on the work in the New Yorker. Battan writes:

[Twenty-first century] life chafes against the lessons of “The Artist’s Way,” rendering them almost impossible to follow. Hobbies are now necessarily productive...We’re encouraged to be “goal-oriented” and rewarded with outsize praise for everything we’ve accomplished, and so we feel that we need to turn every creative pursuit into a professional one...What we need, instead, are new voices granting us permission to try new things in private—and then leave them be.

I'm not sure if it was the wisdom that comes with age or with distance or with reduced general chaos in life, but as I digested Battan's argument, I realized a couple of things. First, even if I wrote an analytical literature thesis almost a decade ago and even if I work in a profession that skews towards being highly analytical, I have been letting these things define me more than I would like to. I think it's easy for me to not view myself holistically.

This realization led to the next one: happiness can be an end to creativity. I have spent most of my life committed to overachieving and succeeding in everything I do. I always overloaded my school schedules with the hardest classes, and/or worked two jobs, and/or simultaneously volunteered at three different organizations, and/or joined as many work committees as I could. Going through life this way is too stressful to be sustainable. I am challenging myself to accept that I am a person with limits and that I don't need to be reaching for a book deal to do something I enjoy.

With that, here are some tools that DPL has to anyone wanting to put pen to paper or hands to keyboard:

As for me, I never unsubscribed from The Lighthouse's email newsletter. A few weeks ago, I opened the announcement of classes for the 2019 winter session. I saw a four-week seminar that sounded really interesting and I registered immediately. It seemed like a gentle re-introduction to developing a practice. It's been a long time and I'm pretty nervous. But I'm going to hang up whatever my version of ballet slippers is and think instead about another morsel of Mad Men wisdom: "It's your life. You don't know how long it's gonna last, but you know it's got a bad ending. You've gotta move forward...as soon as you can figure out what that means."

The image used for this blog is a public domain work titled "Writing Home" by Mabel Peacock. It can be found in the digital collections of the National Archives at this link.

Have questions? Librarians are ready to help you 24/7 from our Ask Us page.

Research
Written by Lauren on January 9, 2019

Thanks for this blog post! I especially appreciate your point about not defining yourself by what you've done in the past. The resources look really helpful, too. Good luck with that Lighthouse class!

Great post! I appreciate the insight and you are right! It is time to get creative!

Great post! I'm going to look at my hobbies a little differently now. It's nice to enjoy them for the sake of enjoying them.

Bravo! Your writing is not only informative - it's inspirational!

Bravo! Your writing is not only informative - it's inspirational!