A (Candy Corn) Kernel of Truth: 40 Years in the Shadow of Unsolved Murders

My colleague Ross and I have done a lot of research, programming, and blog posts on the topic of misinformation. Last year, we premiered a brand new program on the topic of urban legends (back this year for two sessions), which may seem a little out of the misinformation wheelhouse. I wrote last year on how these two topics are connected by their ability to exploit our emotions in order to override our rationality. There is another element the two share: they both feel real because they share a kernel of truth.

I was not alive in 1982. Not that it seems to matter much. Popular culture has been feeding us a steady diet of '80s nostalgia for about twenty years, from VH1's retrospective I Love the 80s in 2002 to the 2010s cascade of remakes and all the original intellectual properties we've consumed along the way. While writing this, I went to my kitchen to eat a handful of Retro Recipe Golden Grahams (allegedly "the taste of [my] childhood"), and looked back of the box: 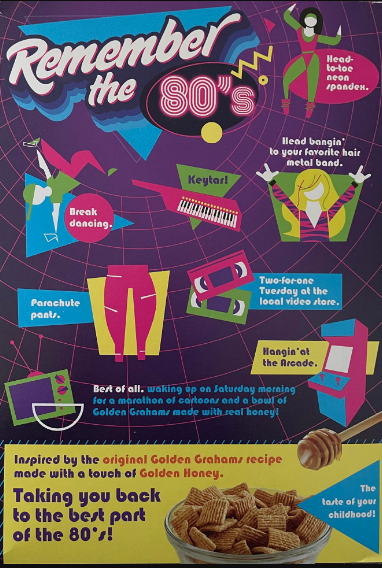 Not even our snacks are safe from 80s nostalgia.

But it's not all neon colors, Kate Bush songs, and shoulder pads. It's not even large-scale geopolitical conflict. (And according to this retro-themed podcast, it's not really even putting honey back in Golden Grahams because the recipe didn't change until 2012.) Historical events both obvious and forgotten have shaped us as individuals and as a society, rippling out to touch everything--even things that seem as mundane as our medicine cabinets.

Forty years ago this month, seven people in the Chicago area died mysteriously between September 29-October 1, 1982. As public health officials, law enforcement, politicians, and others raced to unravel the mystery, the culprit emerged as Extra Strength Tylenol. At the time, the medication was sold as capsules with powder inside, allowing the perpetrator to lace them with cyanide. The murderer has never been caught.

Among the victims were a twelve-year-old girl, a mother of four (including a week-old infant), and three members of one family. Within a week, Chicago had rolled out a massive information campaign to warn the public and Johnson & Johnson issued a recall of as-yet-unheard-of proportions. The aftermath still echoes in today's views of product safety, corporate accountability, and Halloween. To read about these events in detail, Chicago Magazine published an excellent thirty-year retrospective oral history where many of the major players describe these events as they unfolded.

Researching this blog put me through the test of combing through many sources. In addition to sources found through straight-up Googling such as the Chicago article above, I turned to DPL's Newspapers page to read historical coverage of the event as it unfolded. Our database collection includes New York Times Historical, with coverage back to 1851. There I was able to read initial reporting, early progress in the investigation, and Tylenol's stunning rebound back into consumers' trust.

Our US Major Dailies database coverage also includes the Chicago Tribune, but only back to 1985. While we don't have access to some of the coverage contemporary to the event, they did publish some great retrospectives in 1992 and 2002, and coverage of the case reopening in 2009. I was able to supplement some additional local coverage by digging up another Chicago Magazine article about the extreme caution the Chicago area took around Halloween 1982, less than 30 days after the poisonings.

Fears of contaminated trick-or-treat sweets were not new in 1982. Joel Best is a sociologist at the University of Delaware and the pre-eminent scholar on this perceived phenomenon, which is called "Halloween sadism." He and co-author Gerald T. Horiuchi wrote an article called "The Razor Blade in the Apple" in 1985, which I requested via Interlibrary Loan last year as we developed our Urban Legends program. Best has compiled decades of data tracking claims of Halloween sadism published in newspapers since 1958, and is still publishing his findings today. Reports of Halloween sadism have ups and downs, with a major spike in 1982 on the heels of the Tylenol Murders.

However, as Best wrote in the 2021 update to his research linked above, he has "been unable to find a substantiated report of a child being killed or seriously injured by a contaminated treat picked up in the course of trick-or-treating." (He also notes it is impossible to prove it has never happened, but it has never been covered by major media.) There have been reports of minor injuries or near-misses over the years, plus hoaxes. There have also been a handful of deaths that started out blaming Halloween sadism before the truth was revealed. Most of these turned out to be deaths from natural causes. In the two most notorious cases the child's family were responsible for the death, an accidental heroin overdose in 1970 and a murder in 1974.

Due to this lack of evidence, Best has long classified Halloween sadism as urban legend, that is, pervasive but unsubstantiated claims that express our social anxieties through narratives that seem true but aren't. As he writes in his 1990 book, Threatened Children (available thru Prospector):

In most respects, these villains resemble their counterparts in traditional tales featuring endangered children (e.g., Hansel and Gretel, Little Red Riding Hood), albeit with updated trappings (Tatar 1987). The dark forest has been replaced by the shopping mall, the enchanted apple by the contaminated treat, the witch or wolf by the criminal or Satanist. Urban legends are expressions of anxiety; they articulate contemporary concerns. (140)

Halloween sadism unites two of the most prevalent motifs across urban legends: child endangerment and contaminated food. Add some scary real-life events to the mix and it seems like a recipe for decades of warnings. This 2014 article from the Greeley Tribune cites the Tylenol murders as the impetus for trick-or-treat alternatives like a community Halloween party in Windsor. Today we still see fears over contaminated candy, but with a modern twist: the idea that trick-or-treaters will receive candy laced with THC (i.e., the psychoactive property in marijuana). Since recreational marijuana became legal in Colorado in 2014, local law enforcement in both Colorado and Nebraska warned of of edibles being handed out, a scenario that hasn't materialized even as legalization spreads. The New York Times published an article on this topic just last year, including an interview with Joel Best (who is interviewed for every one of these articles every single year).

By the time I came around further into the 1980s, my parents would have been contending with a world colored not just by the Tylenol poisonings, but by other moral panics such as the Satanic Panic and Stranger Danger. I had the great privilege of a happy and stable childhood, but always lurking were events like the Oklahoma City bombing, the Columbine shooting and 9/11, which only continued to teach me that there are people out there exploiting cracks in our sense of a safe status quo. It simply boggles my mind to try to conceive of a world where tamper-proof packaging was a revelation in the face of tragedy.

While writing this blog, I was struck by a memory from high school of my French teacher warning us about a man impersonating a police officer and pulling over teens in the next town over. The setup is exactly like an urban legend, except I verified it through our Denver Post collection. In the past couple of years, everyday life has become scarier than I ever could have imagined. Fear is a powerful thing: it has its place in our evolution but it can be all-consuming to an unhealthy degree. One way I try to mitigate a pervasive sense of all-encompassing doom is to use the research tools at my disposal (the internet, DPL databases, Prospector books, interlibrary loan--all of which I've mentioned here) to find reliable sources that will help me sift out what information is actually credible so I can figure out what actions are within my control to take.

To learn more about urban legends, be sure to join us for the virtual program, which will be presented on September 29 and October 26. For more information on misinformation, using our research resources, or anything else, you can ask us anytime.

If you want to learn more about the Chicago Tylenol Murders of 1982,here are some other resources that may interest you:

KERA News: "How the Tylenol Murders fundamentally changed the way we all take medicine," 2018.

PBS Newshour: "How the Tylenol Murders of 1982 changed the way we consume medication," 2014.