Hello movie lovers! It's that time again for us staff here at Denver Public Library to offer up our favorite movie picks. From new to classics there are so many great picks this month that we couldn't wait to share with you all! This month we picked the theme of scary movies in honor of Halloween!

​Join film professor John Anzalone on November 13th for an in-depth look at Body Heat (1981), written and directed by Lawrence Kasdan with Kathleen Turner making her film debut as Matty Walker. Watch this award winning neo-noir thriller on Kanopy and/or DVD with your library card, then join us online for the discussion.

Erin W.
Let the Right One In (2008) Swedish DVD & Kanopy
With moody lighting and a taut sense of foreboding, this story about a friendship forged between two children is a strong example of an excellent horror movie that is also a stunning film. Based on the novel by John Ajvide Lindqvist.

Lily
The Babadook (2015) DVD & Kanopy
A widow tries to care for her son in the aftermath of her husband’s violent death, all the while a supernatural entity from a menacing children’s book invades their home and life. Interesting enough, the babadook has also become a LGBTQ+ icon and meme.

Elizabeth
Eden Lake (2008) Kanopy
Nursery teacher Jenny and her boyfriend Steve, escape for a romantic weekend at a remote English lake surrounded by woodlands. The couple's peace is shattered when a gang of obnoxious kids encircles their campsite. Reveling in provoking the adults, the gang steals the couple's belongings and vandalizes their car leaving them completely stranded. When Steve confronts them, the weekend spirals out of control.

Jenn
Pig (2021) DVD & Kanopy
Nicolas Cage quietly stars as a reclusive truffle hunter in the woods outside of Portland, Oregon. When his truffle pig is stolen by thieves in the middle of the night, he goes out in hunt for her and revisits his surprising past in the city. This subtly moving film packs a surprisingly tender punch.

Andrew W.
The Return of the Living Dead (1985) Kanopy
On Freddy’s first day of work at a medical supply warehouse he accidently releases toxic gas from a secret military canister, reanimating the dead and turning them into brain-hungry zombies. Directed by Dan O'Bannon (writer of Alien, Dark Star, Total Recall) with a soundtrack featuring 45 Grave, The Cramps, T.S.O.L., The Damned, and more.

Dodie
Poltergeist (1982) DVD
Move to the suburbs and what do you get? Demonic possession, that’s what! Strange and creepy happenings beset an average California family, the Freelings -- Steve, Diane, teenaged Dana, eight-year-old Robbie, and five-year-old Carol Ann -- when ghosts commune with them through the television set. Initially friendly and playful, the spirits turn unexpectedly menacing, and, when Carol Ann goes missing, her parents turn to a parapsychologist and eventually an exorcist for help.

Daniel
Werewolves Within (2021) DVD
In this whodunnit murder mystery, a snowstorm traps smalltown residents inside the local inn, and it is up to the duo of the new forest ranger and the postal worker to figure out the mystery: the mystery being who among the residents is a werewolf terrorizing the community?  It is full of twists and turns, really good humor, and even opens with a quote from Mr. Rogers!

So I have to ask, What's your favorite scary movie? 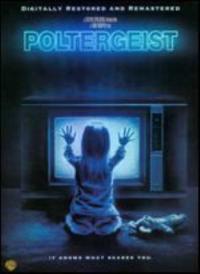 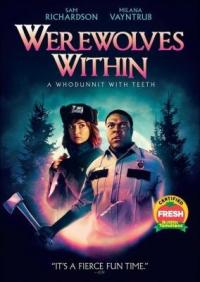