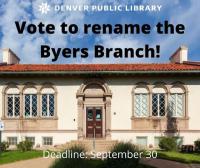 The final five names fit the criteria created by the Renaming Community Committee that is being spearheaded by Library Commissioner Jehan Benton-Clark and District 3 Councilwoman Jamie Torres.

The final branch names include:

The Denver Public Library embarked on the renaming of the branch in the fall of 2020 after discovering that the namesake of the branch had been a supporter of the Sand Creek massacre. Earlier this year, a renaming community committee was formed consisting of a diverse group of community members tasked with leading the renaming process. Over the summer, Denver Public Library requested name recommendations from the community. The committee narrowed down the community’s name recommendations to five choices, now open to a public vote.

All recommended names submitted were researched and vetted. Following the public vote, the final branch name will be presented to the Library Commission on October 21 for final approval.

The Byers Branch Library opened in 1918 and is one of Denver’s five historic Carnegie Libraries. The branch recently reopened in June after renovations as part of the Elevate Denver bond program. The library’s renovations bring a new look to a familiar community space.