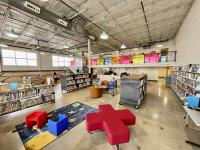 Community Submissions Have Been Narrowed Down to Four Potential Branch Names

Voting is now open to the community to name the new Denver Public Library Branch at the ArtPark Community Hub with voting ending on Friday, April 1. The public can go to denverlibrary.org/ArtPark or stop by the Branch Library at ArtPark (1900 East 35th Street, Suite A) during open hours to pick up a printed voting form.

A Community Naming Committee was formed in late summer 2021 and set name criteria for the new branch. During fall 2021, the community was invited to submit names for consideration. All recommended names submitted were researched and vetted. Following the public vote, the final branch name will be presented to the Library Commission on April 21 for final approval.

The final branch names include:

Bob Ragland (1938-2021) was a prolific and well respected Black visual artist, teacher, consultant/coordinator, tv producer, and more. He authored and published “The Artist’s Question and Answer Book” and “The Artist’s Survival Handbook”, (or, “What To Do Till You're Rich and Famous”) and is honored as an award winning artist who worked with multiple mediums. As a longtime resident of both the Whittier and Five Points neighborhoods, Ragland was an advocate for Colorado art/artists as well as art in public schools. He also taught at Emily Griffith Opportunity School, George Washington High School, and Bradley Elementary.  He even had a segment during Denver channel 2’s “Montage, a look at the Arts” television show as well as a series on PBS KRMA TV6 titled “You’re an Artist.” Some of his work is publicly displayed including his 1990 sculpture, “Flute Player with Corn Row Hair”, at the Kirkland Museum of Fine and Decorative Art.

Lorraine Granado (1948-2019) was a lifelong, third generation resident of the Globeville, Elyria-Swansea neighborhoods in North Denver. Inspired in part by the Chicano movements of the 60s and 70s, she co founded the Cross Community Coalition in 1987. For decades, she fought environmental degradation resulting from the existence of and attempts to expand the I-70 corridor that had physically separated the communities from the rest of the city and increased noise and pollution in a community that was minority majority. Her work throughout the largely Hispanic community north of I-70 earned her the MLK Humanitarian Award (1997), the Self Sufficiency Award (2000) from the Latin American Research and Service Agency, and the Cinco de Mayo Award (2003).

The new branch is located on the eastern side of the South Platte River, which was named by the French Mallet Brothers, “Plat” meaning flat or shallow. While generally not considered a mighty river, it has been a draw for plants, animals, and people seeking sustenance for millennia. In prehistoric times, seasonal camps would be set up to sustain those hunting small game or gathering amaranth or plums. The South Platte is not considered a navigable river, but it marked the route for wagons, trains, and highways. It was the home to trade outposts and seasonal campsites for historical tribes of the mountain and plains. After gold was discovered, the city of Denver arose and the river would provide for agriculture and industry.

The RiNo Art District has developed an open green space at 35th and Arkins called ArtPark - a creative hub in the Five Points neighborhood designed to spark innovation and bring people together - in which the new branch is located. In addition to Denver Public Library, ArtPark creative and community partners include RiNo Art District, the City of Denver, Denver Parks and Recreation,  RedLine Contemporary Art Center, and Focus Points Family Resource Center. These partnerships are exploring intersections of nature, recreation, and culture. For more information, visit rinoartpark.com

The branch opened in mid-February. An official grand opening celebration will be held when the branch is named.