Monument for the 308 Comes to Denver Public Library 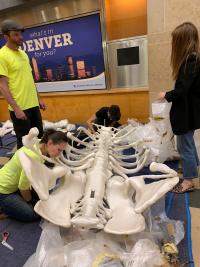 ABOUT THE ARTWORK
Monument for the 308 is a monumental sculpture by German artist Andreas Greiner that resembles a skeleton dinosaur in a natural history museum. However, the animal depicted is a common broiler chicken of the type Ross 308 and is not extinct like its prehistoric ancestor. Today, these chickens are bred in staggering numbers with an anatomy manipulated to serve human meat consumption. Monument for the 308 acknowledges the reciprocal dependency between this animal and humans.

This particular artwork is part of a wider project titled MONUMENTAL, which looks at the role monuments play within public space. MONUMENTAL is in partnership with The Denver Theatre District.

This artwork is at the library because it relates to the context of the library as a place for human knowledge. The artwork focuses on human impact on the world, as seen through the genetic changes that the broiler chicken has gone through because of humans.

How long will this artwork be on display?
You can visit the artwork at the Central Library,10 W. 14th Ave. Pkwy, Denver, CO  80204 until December 8, then it will go back to the artist’s studio in Berlin, Germany.

The title of the artwork references 308, what does that mean?
The Ross 308 chicken is one of the most common types of chickens. They are common worldwide because they are fast maturing meat breed which needs to be killed young (typically 3-4 months old) as their skeleton cannot sustain their size beyond that age.

Why is the title of the artwork Monument for the 308?
This artwork is a monument to the human impact on the planet. In other terms, it is a sculptural monument to the Anthropocene, a newly proposed geological epoch that marks the point when human impacts on many of the Earth's geological processes became overwhelmingly indisputable to geologists worldwide. Many in the field say that the chicken is an apt mascot for the Anthropocene, as modern meat chickens have changed dramatically from their ancestors in their presence around the globe, production and consumptions by humans, locations of their remains, and the genetic changes which include the meat to bone ratio.

ABOUT THE ARTIST
Andreas Greiner (German, born 1979) studied at Universität der Künste in Berlin, in Dresden, Budapest, Florence and San Francisco before graduating from Olafur Eliasson’s Institut für Raumexperimente. His work deals with scientific research and phenomena to spread not only natural sciences but also humanities and artistic practice itself. With a background in medicine, anatomy and sculpting, Greiner focuses on time sculptures to propose a definition of sculpture. His body of performative works apprehends life as a process. When working in collaborations, Greiner realizes studies and performs actions in order to gain knowledge and to follow a path to discovery. Greiner’s work has been shown in numerous solo and group exhibitions worldwide, most recently in Zurich, Tokyo, Berlin, Barcelona, Addis Abeba and Moscow.

ABOUT THE ORGANIZATIONAL COLLABORATION
This artwork is curated by Black Cube, a nomadic contemporary art museum, produced in partnership with the Denver Theatre District and hosted by the Denver Public Library, Central Branch. This artwork is part of a larger public project titled MONUMENTAL, which is a series of public, contemporary artworks and community engagement programs that explore, question, and transform the role monuments play within society.

MONUMENTAL is funded in part by the Bonfils-Stanton Foundation and the David and Laura Merage Foundation.

ABOUT MONUMENTAL
MONUMENTAL is a series of public, contemporary artworks and community engagement programs that explore, question and transform the role monuments play within society. Comprised of a series of temporary art installations in Denver, Colorado, the project endeavors to reimagine how public icons can better represent the diversity of the communities, foster civic engagement, and enliven public spaces.

MONUMENTAL highlights five artworks by local, national, and international artists, illuminating various interpretations of the relationship between monuments and our community, national identity, and changing world. By asking contemporary artists to respond to monuments’ role in forming civic identity, memorializing events, or creating a sense of place, the artworks in MONUMENTAL reveal the nuanced relationship communities have with public work and encourage a timely conversation.

MONUMENTAL is on view July 12, 2019 through January 31, 2020, with the For Freedoms billboard extended through June 30, 2020. This project is co-produced by Black Cube and the Denver Theatre District, with artworks curated by Black Cube.

LEARN MORE ABOUT THE PRODUCING ORGANIZATIONS

About Black Cube (a nomadic art museum)
Black Cube is a nonprofit, nomadic art museum headquartered in Denver, Colorado. By operating outside of traditional museum confines, Black Cube endeavors to reach diverse audiences across the globe while supporting artists’ sustainability. At its core, Black Cube stimulates the public realm with ambitious, experimental, and engaging contemporary art that seeks to inspire. To advance its mission, Black Cube offers an artist fellowship, exhibitions, and public programming focused on sustaining artists’ careers and forming meaningful relationships with audiences. Since 2015, Black Cube has worked closely with over 100 artists and produced nomadic exhibitions regionally, nationally, and internationally—from small Colorado mining towns to the world stage of the Venice Biennale. Black Cube was founded by philanthropist, Laura Merage, and is supported by the David and Laura Merage Foundation. Learn more at blackcube.art, or engage on Facebook and Instagram (@black_cube_nomadic_museum).

Library News
Monument for the 308
Denver Chicken Sculpture
Written by dcordova on September 4, 2019