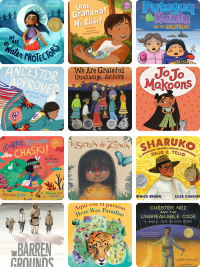 Welcome to Book Explorers! It’s like a book club for kids that you can do anytime, anywhere.

This month we’re talking about books by and about Indigenous people. Indigenous People’s Heritage Month honors the culture and traditions as well as the long and powerful history of the first inhabitants of the United States. It’s a celebration of the diversity and resilience of Indigenous nations and people.

Check out these books from any Denver Public Library location. Anyone who lives in Colorado can get a free library card. Register for a library card online to begin checking out eBooks right away.

Look, Grandma! Ni, Elisi! by Art Coulson - “Bo wants to find the perfect container to show off his traditional marbles for the Cherokee National Holiday. It needs to be just the right size... And it needs to look good!” (publisher’s description).

We are Water Protectors by Carole Lindstrom - “When a black snake threatens to destroy the Earth and poison her people’s water, one young water protector takes a stand to defend Earth’s most sacred resource” (publisher’s description).

We Are Grateful: Otsaliheliga by Traci Sorell - “The Cherokee community is grateful for blessings and challenges that each season brings. This is modern Native American life as told by an enrolled citizen of the Cherokee Nation” (publisher’s description).

Putuguq and Kublu: And the Qalupalik! by Roselynn Akulukjuk and Danny Christopher - “What creatures lurk beneath the sea ice? Putuguq and Kublu‚ two siblings who can't seem to get along- are about to find out!” (publisher’s description).

Jo Jo Makoons: The Used-to-Be Best Friend by Dawn Quigley - “Jo Jo Makoons Azure is a spirited seven-year-old who moves through the world a little differently than anyone else on her Ojibwe reservation” (publisher’s description).

Chester Nez and the Unbreakable Code: A Navajo Code Talker's Story by Joseph Bruchac - “As a young Navajo boy, Chester Nez had to leave the reservation and attend boarding school, where he was taught that his native language and culture were useless. But Chester refused to give up his heritage. Years later, during World War II, Chester—and other Navajo men like him—was recruited by the US Marines to use the Navajo language to create an unbreakable military code” (publisher’s description).

Aquí era el paraíso: Selección de poemas= Here Was Paradise:Selected Poems by Humberto Ak’abal - “A collection of poetry by one of the greatest Indigenous poets of the Americas about the vanished world of his childhood -- that of the Maya K'iche” (publisher’s description).

La Selva de Zonia by Juana Martinez-Neal - “Enjoying days spent with animal friends near her home in the Amazon, young Zonia wonders what to do on a day when the rainforest calls out to her for help, in a lushly illustrated story that is complemented by back matter about the Ashaninka community” (publisher’s description).

¡Corre, Pequeño Chaski!: Una aventura en el Camino Inka by Mariana Llanos - “A tale set in the time of the ancient Inka empire follows the experiences of new royal messenger, Little Chaski, who finds an important assignment on his first day challenged by a trapped condor in desperate need of help” (publisher’s description).

In some schools, kids might dress up in costumes that are meant to represent “Indian” or Native American clothing. But dressing up in stereotypical clothing can be hurtful. Often, these outfits bear no resemblance to the clothes Native Americans wore at the time. For example, wearing feathers was not something everyone did. Wearing feathers was, and continues to be, deeply meaningful and is only done by those who have earned the right.

A Native child growing up in a traditional environment may express themselves and their culture by wearing clothing and accessories with significant colors and patterns. Clothing and accessories that are worn at powwows, dances and ceremonies are called regalia. Important materials in regalia have a long history. Native nations used what they had around them, such as flowers, medicine leaves (sweetgrass), animals for leather (porcupines, birds, elk, deer, buffalo, horsehair, eagles, hawks, birds and more). In the past, beads, thread and needles may have come from trading posts.

Growing up in Native American cultures, kids learn the spiritual significance of colors and their connection to things in the earth, water, universe, seasons, and more.

There are 574 federally recognized tribes in the United States. Each has its own tribal culture, language, clothing, songs and dance. Culture is woven from family, tribal historical traditions, as well as the regions where their homelands are located and the places they were historically moved by the United States government.

Think about an outfit or a part of your appearance that is meaningful to you, to your family, or to your culture. Is there an article of clothing or a way of doing your hair that is significant to you? Is there a color that has meaning for you?

What makes those things special? How do they make you feel?

Join Book Explorers every month for more book discussions and activities for kindergarten through fifth grade!

Educators and caregivers, print these activities to share with the young people in your life: 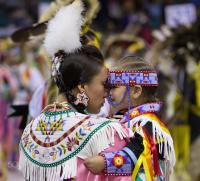