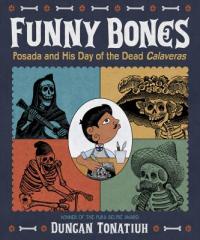 Did you know that the Mexican-originated holiday Día de los Muertos includes a unique form of literature?

Short literary compositions, called calaveras, commemorate Dia de los Muertos, or Day of the Dead, in a clever way. People of Hispanic origins celebrate Dia de los Muertos by welcoming deceased loved ones who journey back to their earthly homes for one night -- November 1st for children and November 2nd for adults. Día de los Muertos, a holiday with indigenous origins and Spanish influences, should not be confused with Halloween.

Welcoming altars, decorative art, painted faces, pastries, and public celebrations are all traditions meant to honor and remember the dead, and calaveras uniquely capture the truth of the holiday. Calaveras literally means “skulls,” and these satirical poems began in the 18th century with authors composing lyrics in the form of epitaphs for living individuals, especially political figures. The Mexican artist José Guadalupe Posada took the satire further through visual art and created La Calavera Catrina, a skeletal woman who represents death. Today, calaveras eulogize living people with quippy verses, perhaps to bring a lighthearted tone to a holiday that has the somber reality of death at its core. The satire of the poems allows authors to point out the flaws of others in a non-threatening way, while getting a laugh at the same time. Newspapers, magazines, and the neighbor down the street all write calaveras as a part of the Día de los Muertos festivities.

Literature can unite people and bring laughter to a holiday with death at its roots. Día de los Muertos is nothing scary, nothing grotesque, but instead centers around families using art and food to commemorate deceased loved ones and using literature to humorously remind the living that someday they won’t be on the welcoming side of the holiday.

The library is celebrating National Hispanic Heritage Month! Join us for a Día de los Muertos event near you. And if you want to learn more, check out some of these great resources from the Denver Public Library.