El Día de Muertos - The Day of the Dead 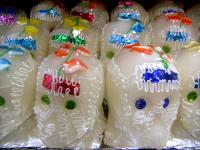 The library is celebrating el Día de Muertos! Join us for creative programs, download this fact sheet in English and Spanish, and check out books, movies, and music for this special holiday.

About El Día de Muertos (Day of the Dead)

El Día de Muertos is a joyous celebration of ancestors and loved ones who have passed away. It is celebrated on November first and second in some regions of Mexico, Guatemala, El Salvador, Bolivia, Ecuador, Peru, Columbia, and Argentina, and in diverse Latino communities in the United States and elsewhere.

While some symbols of this holiday have become part of popular culture, these traditions have deep roots in the sacred observances of indigenous cultures of Latin America, blended over the centuries with European Catholic and pagan customs, modern political and social movements, and unique community practices.

As early as 1500 B.C.E., there is evidence of rituals for the dead in Mexico. In the Mexica culture, the ninth and tenth months of the 18-month calendar were devoted to rituals honoring deceased children and adults. The goddess Mictecacíhuatl presided over death and the underworld. She was honored during this two-month celebration in late summer, when the harvest was shared and the dead returned to visit the living.

With the arrival of the Spanish in the 16th century, indigenous traditions and religious rites were threatened.  As in other parts of the world, Catholic holidays were grafted onto indigenous rituals, and aspects of the original rites survived. In Mexico, festivals honoring the dead shifted to November to correspond with the Catholic holidays of All Saints Day and All Souls Day. Over hundreds of years, local communities in Mexico and elsewhere in Latin America developed rich and unique traditions to celebrate the dead, including processions, family gatherings at gravesites, ornate home altars, special prayers, and religious services.

Ofrendas (Offerings) and other traditions

Many of the symbols, rituals, and objects still used in Mexican Día de Muertos celebrations originated with indigenous Mexican cultures. Altars are created to honor the dead, with offerings of food and drink, candles and incense, favorite objects, and images of the dead. The bright colors and strong scent of the cempasúchil flower (marigold) lead returning souls back to their loved ones, and graves are cleaned and decorated with papel picado (cut paper) banners.

Calaveras de azúcar (sugar skulls) are an iconic Día de Muertos tradition in Mexico. Often decorated with colorful icing and the names of departed loved ones, the skulls may be given as gifts and used in home altars as offerings. Other special foods for Día de Muertos may include pan de muertos (bread of the dead), mole, tamales, pozole, and calabaza (squash or pumpkin).

Día de Muertos continues to evolve as a cultural and community practice. In the 1970s, Chicano leaders, artists, and educators revived aspects of Día de Muertos observances in the U.S., creating altar installations and other community events based on the holiday. These celebrations honored not just family members, but community activists, artists, and other heroes--collective ancestors who shaped Latino history, culture, and politics. These more public, secular community events have served as a cultural touchstone for people of diverse Latino identity in the U.S., and have in turn influenced observances in Mexico and beyond.

Román, I. (2020). Day of the Dead: How Ancient Traditions Grew Into a Global Holiday. History.com. https://www.history.com/news/day-dead-dia-de-muertos-origins 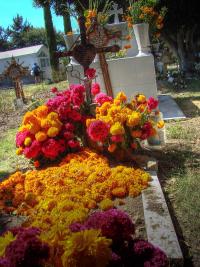 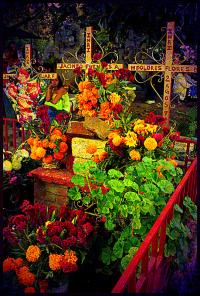 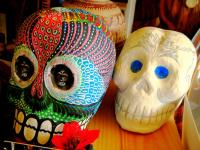 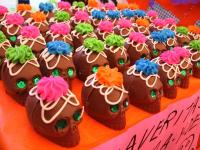