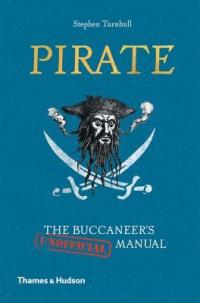 Arrr, mateys, did you know that Talk Like a Pirate Day is on September 19? Grab your parrot and peg leg as we share exploits of times past.

If you’re new to piracy, orient yourself with Pirate: The Buccaneer’s Unofficial Manual, which covers everything you could want to know to join a plundering crew. You’ll be filled in the history of your glorious new career, notable pirates that may be referenced like Blackbeard and Mary Read, pirate lingo to allow you to blend in, and even answers to whether the pirate stereotypes about pirates and planks are true.

While swashbuckling male pirates may be the stereotype, ladies also sailed and looted. Pirate Women: The Princesses, Prostitutes, and Privateers Who Ruled the Seven Seas tells you of notorious women, both real and mythical, who may be new to you. The women range from Norse princess Alfhild to the queen Sayyida al-Hurra to Cheng I Sao, who had about 1,000 more ships than the Spanish Armada.

Finding sunken treasure would be easier if X marked the spot. Two divers looked for a legendary sunken pirate ship in Pirate Hunters: The Search for the Golden Fleece. The divers raced against time, rival treasure hunters, and changing political influence. Turns out that the best way to find a 300-year-old ship is to think like a pirate.

Relive the glory days of piracy in Black Flags, Blue Waters: The Epic History of America’s Most Notorious Pirates. The time from the mid-1600s to early 1700s saw bands of pirates cruising the waters around North America as the colonies grew in size and resentment of England. While this golden age created the stereotypes we know today, the author goes into gritty detail of the truth of pirate lives, such as their dependence on violence, partnerships with greedy governors, family ties, and support of the growing colonial economies through contraband like sugar.

Clive Cussler has been feeding many people’s hunger for ocean adventures for years. Newcomers are guaranteed thrills in his best-selling Sam and Rami series about a treasure-hunting couple. The first book is Spartan Gold, where the couple discovers a map on wine bottles, hidden by Napoleon, that reveal the location of gold dating back to ancient Persia.

End your pirate adventure by watching the movie Pirate Radio about rogue DJs in 1960s Britain. The film stars Philip Seymour Hoffman, Bill Nighy, and Kenneth Branagh, who carry the film on the force of their personalities. Like pirates of old, the DJs rebel against the government’s wishes, but instead of stealing goods, they played rock and roll music, a clear reference to Radio Caroline, which was also based on a ship in the seas around Great Britain.

If you want more pirate in your life, the creators of Talk Like a Pirate Day have their own site where they list additional resources, such as a translator from English to pirate, a pirate name generator, and pirate glossaries that have insults perfect for that jerk who deserves to walk the plank. You can even use our Mango Languages database to take a course in pirate lingo (library card required)!

Prefer to download your books? Explore what’s offered in Overdrive.

Select your treasure and place your hold today!