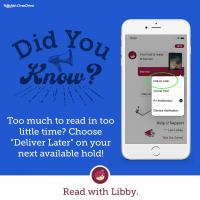 Do you know that sinking feeling when you miscalculated or forgot to Suspend Hold and now all your eBooks or audio eBook holds are coming in at the same time? Overdrive launched a new feature today, March 3, 2020, called "Deliver Later" to help with that. This feature will work in the Libby app, the Overdrive app and our Overdrive web site.

The benefits of this plan:

Automatic hold checkout is no longer available. You will have to borrow each hold within 3 days, but there will be the 7 day grace period followed by a new notification, so you will have a second chance.