What's Growin On: Land Back, Seeds Back 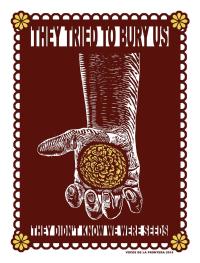 As we approach the Thanksgiving holiday - a time where we celebrate by eating foods that were cultivated by Indigenous people such as potatoes, squash, and green beans - it’s important for those of us of settler descent to reckon with the lasting and ongoing impacts of the American colonial experiment. European colonizers and their descendants committed genocide against the original peoples of this continent through biological warfare, starvation, forced assimilation, relocation, separation of families, outlawing of languages, spiritual practices, and more. Against all odds, Indigenous people have persisted, never relenting in the fight for the protection and preservation of their lands and lifeways - which are inextricably tied together. For Indigenous peoples land is not only home, it is part of who they are. And non-human life forms aren’t understood merely as resources, or future food or shelter, but as kin living in sacred agreement with each other.

It is only through the lens of reciprocal, interdependent relationships that we can begin to discern the depth of connection between Indigenous communities and the seeds they cultivated and stewarded generation after generation prior to colonization. Ceremonies, songs, rituals, and stories of origin sprouted up alongside tender seedlings. So when countless seed varieties were taken from their communities of origin by force - whether by burning of crops, theft of storehouses, forced removal, or even criminalization - the loss wasn’t limited to a source of food. Indigenous mama, plant persun, and storyteller Josie Valadez Fraire writes in her Patreon about the outlawing of amaranth:

“During times of active colonial warfare in the early 1500’s, the Spanish made growing, selling, and harvesting amaranth illegal. This was a political, economic, ethnocidal action that directly affected the health and nourishment of entire peoples. Just like we see today, food has been weaponized as a settler colonial tool to weaken and control communities…Amaranth is a living example of indigenous resistance and traditional foodway survival.”

In instances where Indigenous communities weren’t able to maintain unsevered ties to their seed relatives, a powerful, healing process is emerging. Rematriation is an adaptation of the term repatriation (the returning of sacred items and artifacts to their communities of origin) to describe the returning of seeds to their original stewards, who were typically women, and to Mother Earth. This restoration is being made possible through cross-cultural collaboration between farmers, seed banks, museums, universities, and the Indigenous people to whom the seeds belong as their “cultural inheritance” (a term used by Rowen White, Mohawk seedkeeper). The Akwesasne Seed Rematriation Garden at the Hudson Valley Farm Hub in New York offers up their land, labor, and resources to grow corn that is harvested, then returned to the Akwesasne Mohawk Tribe season after season. When the partnership first began, there were only two ears of sacred Mohawk Red Bread Corn remaining in existence. Through the rematriation work, over a thousand pounds of that same corn have been harvested - corn that feeds people, connects generations, and restores relationship between people and the land. Restoration of seeds and their people is also happening between the Meskwaki and the Field Museum, theTaos Pueblo and Seed Savers Exchange, the Haudenosaunee and Seed Savers Exchange, the Pawnee Seed and Land Preservation, the CIMMYT Genebank (Oaxaca, Mexico), and the Utah Diné Bikéyah and Grand Prismatic Seed Indigenous Seed Benefit Sharing Partnership. Here in Denver, the traditional lands of the Ute (Nuchu), Cheyenne (Tsistsistas), and Arapaho (Hinono'ei), Ekar Farm and Spirit of the Sun partnered to grow Hopi Blue Corn together.

Rematriation demonstrates multiple, compelling truths: the people from whom seeds were stolen are still here - and have been here despite numerous, violent attempts to destroy them and their ways of life. It is evidence that restoration, healing, and reparations are not only possible, they’re already taking root across communities, institutions, and cultures. And in an era marked by mass extinction, climate chaos, and uncertainty, the role of Indigenous peoples in our planet’s survival is both undeniable and indispensable. A 2021 Oil Change International report found that “Indigenous resistance has stopped or delayed greenhouse gas pollution equivalent to at least one-quarter of annual U.S. and Canadian emissions.” While indigenous people make up less than 5% of the population, they protect 80% of the planet’s biodiversity.

“It is not enough to save heritage seeds. The culture of those people to whom each seed belongs must be kept alive along with seeds and their cultivation. Not in freezers or museums but in their own soil and our daily lives.” (Martin Prechtel, 2012, Unlikely Peace at Cuchumaquic)

What you can do:

Corn Among the Indians of the Upper Missouri by George Will

The Seed Keeper by Diane Wilson

How we Can Work to Revitalize Indigenous Foodways (Nourish Colorado)

The Native Seed Pod: an Antidote to the Monoculture 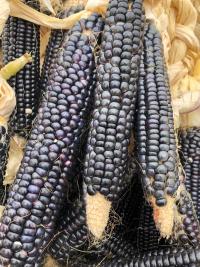 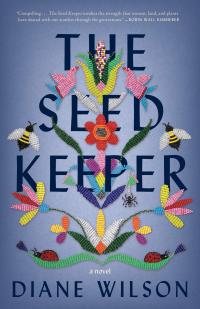