Animals and Their Humans

Where would we be without our furry, fuzzy, winged and scaled companions? Especially now. It’s obvious that animals bring us joy, love and a sense of purpose. And for the humans in this title roundup, their animal sidekicks provide guidance, protection, and some mad problem-solving skills!

Let’s start with Colorado author Margaret Mizushima’s Timber Creek K-9 novels featuring Officer Mattie Cobb and her police dog Robo. Mizushima goes deep into the functions of K-9 units with deep respect for both the animals and their handlers. From solving murders to busting up poaching rings, Mattie and Robo make a fantastic team. The latest title in the series, Tracking Game, has been nominated in the mystery category for the 2020 Colorado Book Awards!

Horse, the debut novel of poet Talley English, is about the healing that can come from human-equine relations. When her father abandons the family, Teagan steadies herself by training Ian—that is, Obsidian, her father's head-tossingly, fiercely beautiful, stubbornly independent-minded horse. She comes to reevaluate her beliefs about family, loss and forgiveness while connecting with her new friend.

Spencer Quinn is well known for his Chet and Bernie series and has gifted us with The Right Side, a stand-alone novel about a wounded warrior who finds hope in a stray dog. When LeAnne returns from Afghanistan, she is blind in one eye and broken. After a local girl disappears, she and Goody team up to find her, giving LeAnne a chance to work through her PTSD and recover memories from her wartime experiences.

Michael Chabon’s 2004 title The Final Solution is slim but full of the beautiful prose you’d expect of him. An 89-year-old former detective in rural England becomes involved with a young refugee from Nazi Germany whose sole companion, an African grey parrot, spews out a series of numbers that could hold the key to a dangerous secret. The sleuth soon realizes that issues of national security could be involved here, with spies and code-breaking à la The 39 Steps, and he has to bring all his analytical skill to bear. The audio version, read by Michael York, is outstanding.

Dogs and cats working together?! That’s exactly what happens in Rita Mae Brown’s most recent Mrs. Murphy mystery, Whiskers in the Dark. A massive nor'easter on the eve of an annual National Beagle Club benefit finds Harry Harristeen, with her crime-solving kitties and corgi Tee Tucker, linking the murder of a foreign services officer to an unsolved killing from the 18th century. Brown’s love of animals and nature shines through.

One reviewer called Hollow Kingdom by Kira Jane Buxton "The Secret Life of Pets meets The Walking Dead," so yes: weird and wonderful! Sensing something is wrong with his owner, a domesticated crow abandons the only life he ever knew to discover that humans are turning into zombies and he must use knowledge gleaned from his TV-viewing to save them. This is a totally new twist on the apocalypse, experienced from corvid S.T.’s point of view. 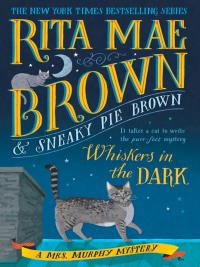