Universe-Shattering Ideas on the Bus... or Pseudoscience? 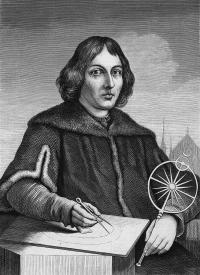 Recently, on the mall shuttle, there was a young man expounding with boundless conviction and enthusiasm to his silent and smiling friends on the certainty that we live on a flat Earth. "Why, there is just as much proof for a flat Earth as there is for it being a ball...Up until 200 years ago, everyone believed that the world was flat until Copernicus said that the Sun went around the Earth." He also said that, "Copernicus was the first to say that the Earth was round," and that the Sun and the Moon go around the top of the Earth as if they were following the hands of a clock in the sky. He further explained that, "water naturally tries to be flat" and that we have been told that gravity holds the water to the Earth but there is no proof of that. And he's seen how flat the horizon looks from atop the mountains even though some people say they see a curve. Is there any evidence for this view of a flat world?

A visit to your local library reveals a different view of our cosmos. The Science of Everyday Things explains how the force of gravitation between all matter follows simple rules that have universal consequences. Planets are round because the mass of a planet (or other large celestial object) pulls on all of the rest of its mass and the resulting shape is roughly spherical. A Man On the Moon by Andrew Chaikin tells about our first efforts to send humanity into space and what they found when they got there.  The Encyclopedia of the Solar System takes you on a tour of Earth and our neighboring worlds, showing in great detail what our planetary probes and telescopes have found out to the edges of the Sun's gravitational domain.

We also find in Science in the Ancient World that some of the earliest evidence for the sphericity of the Earth was found in the third century BCE when Eratosthenes demonstrated that the differing angles of shadows in wells at faraway locations indicated that the world was a ball and he even used his limited information to derive a fairly accurate estimate of the Earth's circumference. A check in the Biographical Encyclopedia of Scientists shows that Nicolaus Copernicus lived from 1473 to 1543 and he discovered that Ptolemy's description of a geocentric planetary system from 150 CE didn't describe the motion of the planetary wanderers in the sky as well as a model with the sun at the center. In World of Scientific Discovery, we can read about how Galileo, in the early 1600s, added weight to that model by observing in his homemade telescope that moons revolved around Jupiter and that Venus showed phases like our Moon as one side was illuminated by the Sun in its journey. And a librarian may find for you an article from the peer-reviewed journal Applied Optics that explains how the curvature of the Earth only begins to be discerned on a clear day at 35,000 feet above the ground, over a mile higher than the top of Mount Everest. The shape of our planet (and the others) hasn't been a mystery for a very long time. The gentleman on the bus was adamant, though.

It isn't always easy to tell what is a scientific theory and what is not. The Encyclopedia of Philosophy (available in the Gale Virtual Reference Library in DPL's database collection) tells us that "the term pseudoscience is often employed by those in the scientific community to disparage claims to scientific credibility that, in fact, lack evidence or fail to employ the methods of science."

If an idea about nature can't be tested, then its truth is unknown. We don't know if it is true. Does that mean it might be true? Maybe, but an idea is unlikely if it undermines well-established theories. Sure, Einstein undermined Newton's theory of gravity and Galileo undermined Aristotle's theories of motion. But their ideas were testable and that is why their theories are the foundation of modern science.

New discoveries and the results of experimental testing are shared in peer-reviewed journals where the articles are screened by other scientists in their field with the intention of maintaining high research standards. The journal will then consider the feedback from the review in their decision on whether to publish. And if a scientific paper is published and the conclusions proven wrong, it doesn't necessarily add support to a competing theory. It could just mean that the paper was wrong and we still don't have a good model for why nature works that way.

What are some of the traits of a pseudoscience?

Be particularly wary if they claim that there are mysterious forces or energies at work. And, remember we are all susceptible to confirmation bias where we tend to believe the results that agree with our preconceptions and ignore those that don't. 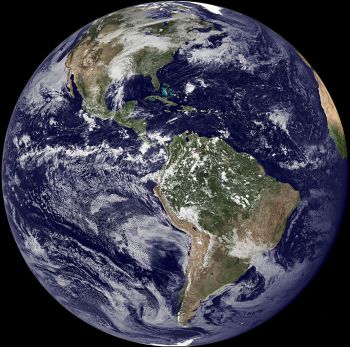 With the internet making us all a few clicks away from every imaginable notion and their believers, it isn't always easy to find a carefully considered analysis of every idea to see if they have any credible support. Sometimes the reasoning for a claim is sound but the premises and assumptions are not. Sometimes the premises are fine but the conclusions are not. We should all be better off if we approach claims with a critical eye. Science works under the premise that there is an objective reality and that we can study it if we ask the right questions. If you are told that the Earth is flat, you may wish to ask them what evidence would change their mind. If their answer is that satellites are a hoax, scientists are engaged in a conspiracy to cover up the truth and that nothing would change their mind, you might want to see if a scientist can make a compelling evidence-based argument for believing that we have, in fact, taken magnificent pictures of Earth (and the rest of our solar system) from space.

Here are some resources in the library that discuss what constitutes science and pseudoscience.
See what scientists have found when they've researched pseudoscientific claims:

Come visit the library. We have librarians that are here to help you find answers about topics of all kinds.
Questions? Ask Reference Services or call 720-865-1363 today!

You sheep that believe anything the government tells you think "pseudoscience" is an insult. But Flat-Earthers do not use science. Science is for stupid people.

Fortunately, there is a new registrar cheap domain names from $0.99

Namecheap exists to help EVERYONE get, make, and achieve more online with less cost, hassle, and headaches. We offer everything you need to get online and thrive, from domains to hosting to security to specialist services and products — all with value built in.